Whenever a company is looking to design and push out a new version or an entirely new model smartphone or tablet, it stands to reason that they are looking to implement the next big design feature or piece of functionality that will set their product apart from the competition. When Apple released the iPhone 4S at the back end of last year, they genuinely believed that the voice controlled Siri assistant would separate their product from the rest, a sentiment that Samsung and Google have subsequently bought into. 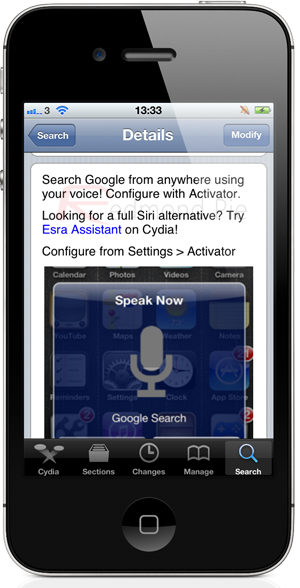 So with voice going to be playing an important role in the future of iOS and other smartphone operating systems, it makes sense that third party developers and specifically those involved in the jailbreak community are wanting to get involved in the audible control boom.  The VoiceSearch tweak that has landed in Cydia is one perfect example of a good implementation of a package that effectively uses audible commands to perform an action.

VoiceSearch is a package that allows users to perform a Google based search using a text string that is spoken into the device, rather than actually having to open up a device based web browser and type the search into the Google search box. When installed, VoiceSearch brings no additional Springboard icons or settings and is set up through the Activator settings that come with Ryan Petrich’s package. Once an Activator gesture has been set, it can then be used to start the listening mechanism of the package where a search command can be given. 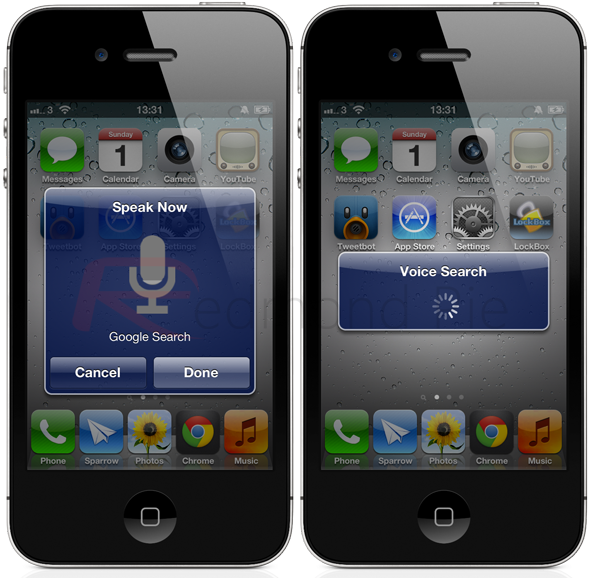 The VoiceSearch interface is made up of a microphone style icon that is embedded with a very a familiar looking UIAlertView and contains a Cancel and Done button that allows the view to be dismissed and the search cancelled, or to complete the search. When Done is selected, the device’s default browser will be invoked with the Google search results returned as you would expect. My own personal testing of the package was quite fruitful, with the voice recognition managing to perfectly capture what I was asking for and translate it into a perfect search string. It also respects the default browser that may have been changed using the BrowserChooser package, allowing Google Chrome to be invoked rather than Safari.

VoiceSearch is available as a free of charge download from the BigBoss repository with no specific iOS version requirements being given.