If, 18 months ago, you’d have told people that Apple could well have a smaller and larger iPad available to match the main 9.7-inch model, you’d have probably been laughed at. Yet Tim Cook’s Apple seems a lot more open to the idea of change, and with the iPad mini now a well-established product in the consumer market, the notion of a larger device suddenly doesn’t sound so inconceivable. Murmurings dating back to May have suggested that the famed tablet range could introduce a larger, possibly 12.9-inch / 13-inch iPad model, and to give an idea of what that could look like, CiccareseDesign has cooked up a couple of tasty concept renders.

Designing the device in the image of the iPad mini with its thinner bezels — something we’re anticipating of the iPad 5 — there’s no doubt that Ciccarese’s visualization is perfectly in-keeping with the rest of the roster. In fact, as well as pitting the 12.9-inch iPad against the current-gen 9.7-inch iteration, there’s also a look at how it might stand against the main model once it has been ‘mini-fied’. You can check out both below: 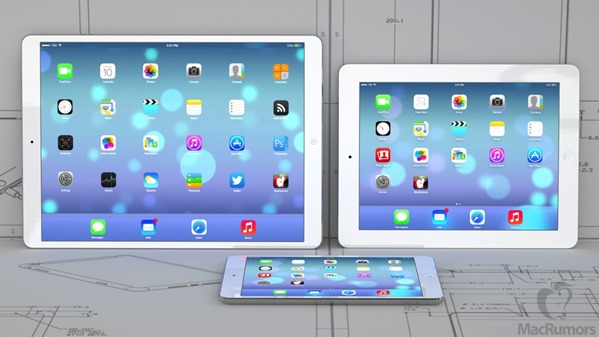 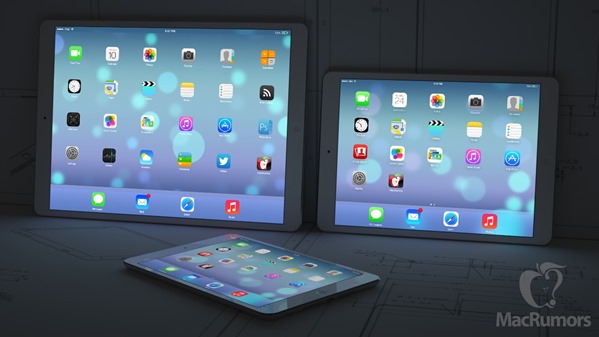 Of course, when you’re talking about a tablet with such a large display, it stands to reason that some folks might like a comparative shot with the Cupertino’s signature notebook — the MacBook Air. Even beside the 13.3-inch model, the 12.9-inch iPad looks a bit of a monstrosity, but with the iconic slate increasingly becoming as productive a device as it is a mere consumption gadget, one suspects there’d be plenty of takers. 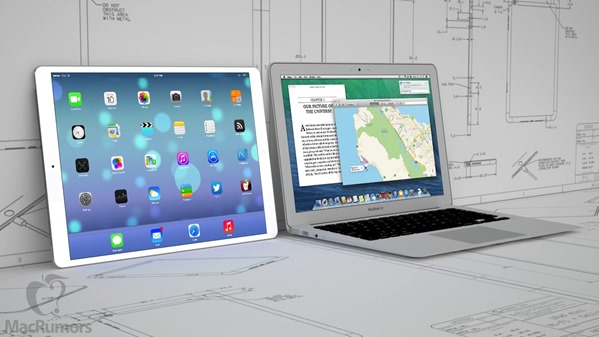 With the main iPad already being among the most expensive tablets on the market, though, it’s not unlikely that Apple’s valuation of the larger iPad will be as high as its display is wide. Still, provided the company doesn’t take the rather unwanted characteristic of the iPad mini by delivering a below-par display, the larger iPad would certainly be a welcome addition to the pack.

When word of an augmented iPad first came to light some months back, some reports suggested the name "iPad maxi," and while this would make sense for purpose of differentiation, it doesn’t seem like the kind of moniker Apple would use.

Then again, as mentioned earlier, today’s Apple is full of surprises, and with the market having warmed to the larger smartphone, perhaps is trying something similar for the tablet.