Apple’s iOS is popular for many reasons, but one of the particularly enticing aspects of the Cupertino’s mobile operating system is that it’s incredibly easy to use. With that said, even the most experienced iPhone, iPad or iPod touch user probably doesn’t know everything there is to know about iOS, and as such, you might just learn something from the neat compilation of tips provided below.

The clip, created by the folks of Cult of Mac, can be seen at the bottom of this article, and if you wish to read through the tips rather than watch a video, we’ve got a breakdown of the very handy iOS hints coming up. 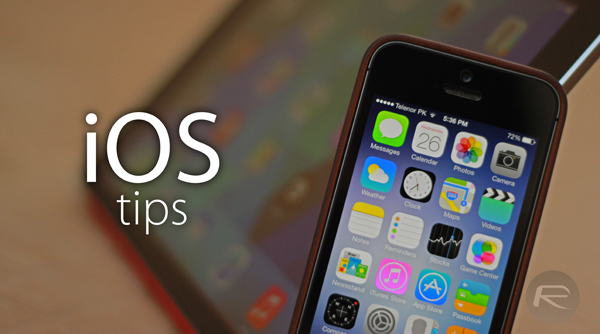 There’s no doubt that iOS’s feature allowing us to deal with notifications right from the lock screen is infinitely useful. Having said that, it also allows others to have a peek at who we’re talking to and what we’re up to. Sometimes, we just want to hide all of these notifications and deal with them later, and by swiping down the Notification Center and dragging it back up, they’re all gone in a flash.

Highlighting text in iOS is actually not as cumbersome as writing it, but when you wish to select a certain line or paragraph, things can get a tad fiddly. By tapping using two fingers simultaneously, you can highlight a line or paragraph in a jiffy, and this is one of those learned tips that you’ll likely use on a daily basis.

The way iOS files names isn’t to everybody’s taste, but this can easily be amended. By going to Settings > Mail, Contacts, Calendars > Short Name, you can mess around with the settings to establish how you’d prefer contact names to show up in Messages, Mail, and others.

Getting that perfect, Kodak Moment is difficult enough, but if you’re already recording a video, you don’t need to resort to pulling those rather blurry, unfocused stills from your clips at a later date. By tapping above the record button (when in portrait mode), a white button pops up, and when you tap it, you can snap photos – while recording – to your heart’s content.

Perhaps one of the better-known tips of this round-up, you can easily silence incoming calls without completely rejecting them. Simply tap on the power button once, and all will be silenced, allowing you to continue about your business and deal with the missed call at your convenience.

So, there you have it. It’s a pretty solid bundle of tips, and even if you’re a seasoned iOS user, we’re sure at least one of those caught you by surprise!