It has been claimed that Apple is sharpening its claws for an assault on the mobile fitness industry, with a so-called Healthbook app presenting a Passbook-esque interface of stacked cards, each containing different snippets of information related to your overall personal fitness and well-being. Today, designer Carlos Quijano has thrown up a concept design of Healthbook for iOS 8 in action, featuring, among other ideas, integration with the elusive iWatch.

Apple fans have been toying with the idea of an iWatch for years, but only during the past twelve or so months has it seemed like the development of said product is actually in motion. During the middle of 2013, we heard that the Cupertino outfit had a team of around one hundred individuals working on the wrist-worn gadget, and with Tim Cook having recently conceded that his company had some exciting new products in the pipeline, it’s looking more likely than ever that we’ll finally be seeing the iWatch this year.

If it does materialize, you feel that its fitness and health-related features will be an integral part of the overall experience. Sure, there’ll be a conflict of interests with close ally Nike and its FuelBand product, but an iWatch, integrated with a Healthbook app, could really help Apple appeal to the fitness-conscious market.

Quijano’s concept is fairly simple, but offers most of the features one would expect from such an app. The color-coded cards are stacked upon each other à la Passbook, with each presenting info specific to the daily fitness regimen.

Information ranges from distance travelled, calories burned, health status (blood pressure, heart rate, etc.), and medications to be taken throughout the day. It’s like a one-stop checklist of everything that needs to be done during the day in order to maintain good health, and with a card designed specifically for note-taking, users can readily outline areas that may need some attention or improvement. 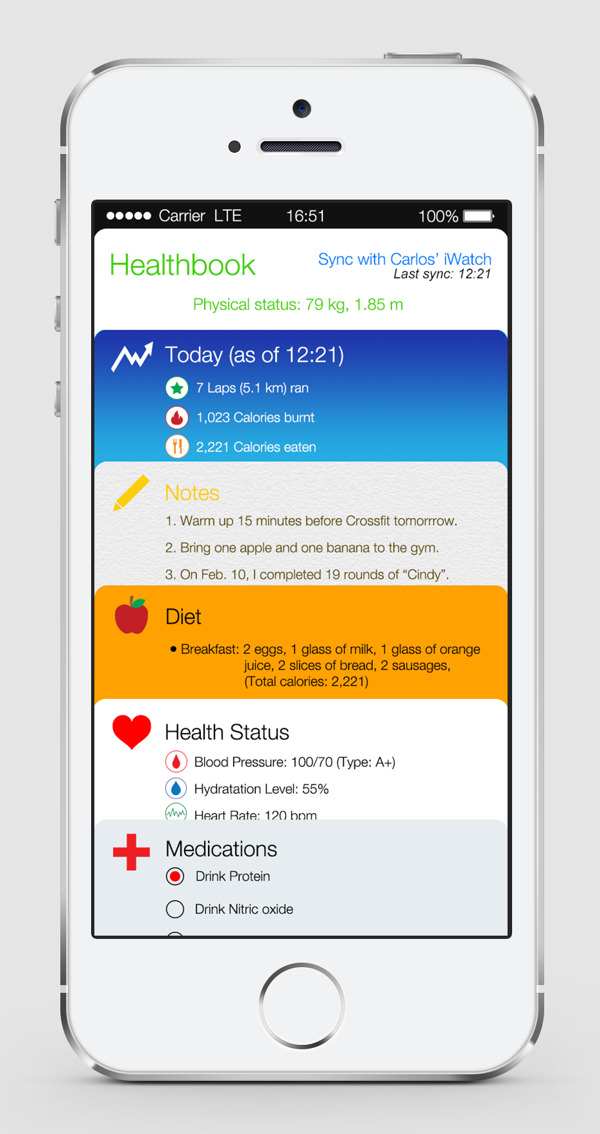 In theory, the concept is wonderful and streamlined, but it’s not necessarily realistic. Testing for heart rate, blood pressure, and hydration levels, for example, would require the proper equipment in order to be carried out accurately, and also, a log for calories eaten would also require a great deal of manual input from the user.

Nonetheless, it’s an interesting idea, and we’d love to hear your take on it.

(Source: Behance) Thanks, Jack for the hat tip!