Google’s I/O developers conference has commenced over at the Moscone Center in San Francisco, and during the opening keynote, the company introduced quite a few exciting new products. Among them, Android Auto – Google’s own answer to Apple’s CarPlay – and Android TV, which even in these early stages, looks a marked improvement on the failure that was Google TV. Below, we go hands-on with both, so if you want a first-hand look at what Google has been slaving over of late, be sure to join us after the break.

Apple outlined its plan to integrate the iOS experience into the car back in 2013, and earlier on this year, properly introduced CarPlay. It was inevitable that Google would counter with an effort of its own, though, and just over three weeks after WWDC, the Big G has showcased Android Auto. 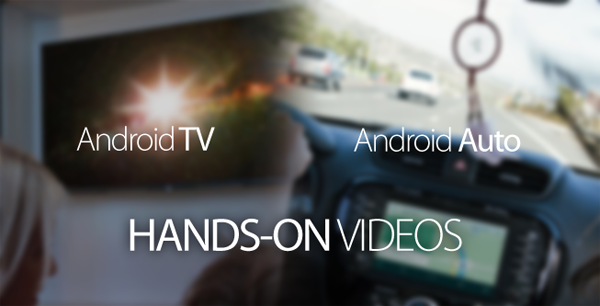 Being attendees at I/O, we’ve had the opportunity to get a proper look at Android Auto, and as you’ll see in the walkthrough video below, it’s both intuitive and heavily influenced by the bold colors and slick animations of the Chrome maker’s so-called “Material Design” initiative.

Taking a closer look at Android Auto, we can see that it’s very touch-oriented, integrating Google’s own services like Google Play Music and Maps alongside third-party offerings, such as Spotify, and thanks to the layered nature of the Material Design, apps appear aware of each other’s presence, rather than overlapping.

Check out the hands-on clip of Android Auto below:

We also managed to get a brief look at Android TV, which will see the Google’s famed mobile OS bundled into TVs at manufacturing stage. It too will benefit greatly from the Material Design Google has been waxing poetic about throughout the day, and will be closely integrated with the Play Store for easy access to content from Hulu, Netflix et al.

Given Apple’s CarPlay movements, a similar offering for Android seems a logical step, and while the Chromecast dongle may have given Google quite a bit of power in the living room, it would seem that Android TV is a move to consolidate the great sales figures that the company has managed to rack up.

What do you make of Android Auto and Android TV?