For any consumer who may be taking the time to consider purchasing a new mobile phone, or a tablet computer, they will more than likely begin by considering either an Apple iPhone or iPad as their purchase of choice. With over a quarter of a billion iOS devices sold around the world, the iPhone and iPad are insanely popular, and considered by many to be the leading products in the mobile computing sector.

But this hasn’t always been the case, just where would the mobile computing industry stand, had Apple not entered into the sector with the launch of the original iPhone in 2007? Well, if recently published research from Tavis McCourt of analyst from Morgan Keegan is to be believed, the industry would only be 50% as lucrative as it currently is today. Morgan Keegan have analyzed the industry performance over the last five years and have found that in the fourth quarter of 2007 the industry’s total revenue was approximately $37.9 billion. Fast forward five years, and the figures from Q4 of 2011, which was also a record setting financial quarter for Apple, totaled out at $71.4 billion which represents a five year increase of $33 billion.

There is a strong argument that as the years have passed, the industry has become stronger with the products gaining a more significant role within our lives meaning that Apple joining the sector may not have had a significant influence on revenue. However, the statistics and figures paint an entirely different story, as when Apple revenue is removed from the equation, the 2011 Q4 industry figures sit at a rather disappointing $37.97 billion, meaning that non-Apple revenue has remained stagnant for five years. 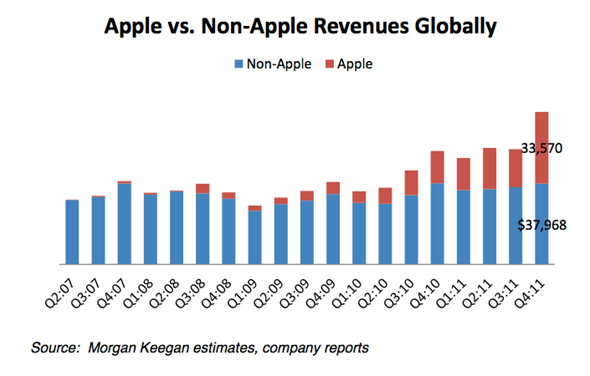 The total revenue of the mobile computing industry has increased dramatically over the last five years which actually makes this research even more remarkable due to the fact that the majority of that financial increase has gone to Apple. In the final quarter of 2011, Apple raked in $33.5 billion in mobile device sales which is a whopping 47% of the total industry revenue. In the report, Tavis McCourt comments: 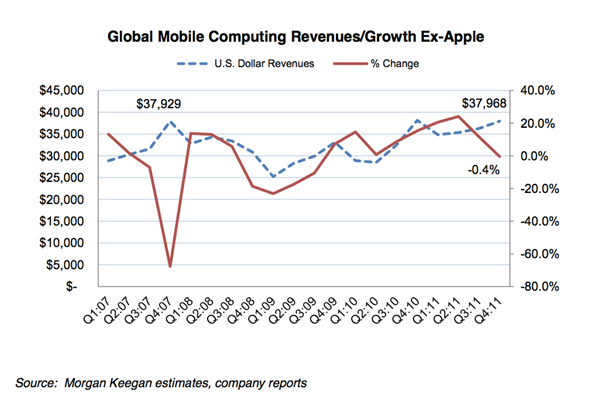 It seems that even though the industry is undoubtedly growing as the years pass, the bulk of this growth is due to Apple and their sought-after products. With Apple also having the highest margins, the majority of the profit is also ending up in their coffers. From a personal point of view, I can’t remember the last time one company had such a significant, dominating influence over the entire sector.