Google says: All your O are belong to us.

Google normally changes its logo on the Google.com homepage to mark important events. Today, it mysteriously changed its homepage logo to a UFO with a link

to the search terms "unexplained phenomenon" leaving many wondering what event the doodle is intended to represent. Does Google believe in Flying Saucers? Or does Google wants to convey that its dominance extend beyond this planet? Some think that the flying saucer maybe symbolizing US Air Power. What message Google wants to transmit can be anybody’s guess. Maybe, it’s a message of peace to humanity.

In the logo seen in the screenshot below, ‘GOOGLE’ which is the symbol of global community, has been disintegrated by alien forces through a beam emitted from UFO. 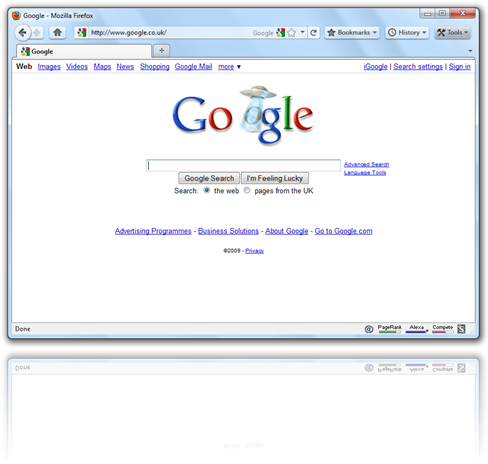 This Doodle may or may not have any meaning. Maybe it is just a joke and someone at Google is laughing at all of us? Will some one clarify the “unexplained phenomenon” and what Google actually wants of all this?