Google clearly wants to take over the world with its search, mobile and desktop businesses and now it seems that it may want to take over your Windows 8 desktop, according to a tasty morsel uncovered by The Verge. More details can be found right after the jump.

Using its latest developer edition of Chrome, Google has begun its foray into the desktop takeover business by effectively allowing its browser to become one with Windows 8, complete with its own LaunchBar that plays host to the usual Google Drive array of icons that give quick access to things like spreadsheets, text documents and more. Gmail is obviously in attendance, also.

Chrome’s metro-interface in the new developer edition allows the app to become its own multi-windowed desktop which makes us think of Google’s Chrome OS really. Except it’s much more useful because it’s got a ‘real’ operating system underneath it in the form of Windows. So yes, it’s safe to believe that Google wants to take over Windows 8 in the form of its own mini OS of its own, which is somewhat great news for those who spend a lot of time using Google’s own services.

The obvious downside here though is that Chrome requires Windows 8 Pro, so those packing the RT edition are out of luck. There’s no Chrome at all for RT, so don’t expect this to be something you’ll be installing any time soon.

This is still very much an early release, too. Bugs galore, this developer release of Chrome still appears to be quite a way from being ready for public consumption, but the fact it exists should be enough to make the future an interesting one for those that live inside Google’s services and happen to have the right Windows software and PC hardware to make the magic happen. If you’ve ever wanted to have Windows 8 with Chrome interweaved, then this should make you very happy indeed. 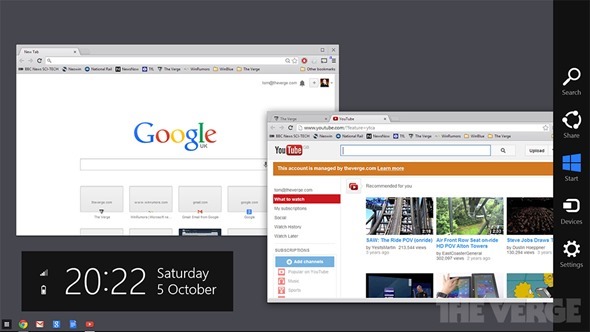 If you just can’t wait for this to reach the public version of Chrome, then you can download the developer release from Chromium.org and install it on your Windows 8 Pro machine right now, just don’t expect it to work as well as the Chrome you’re probably used to!