Over the years, the blogosphere has made fun of Facebook and Mark Zuckerberg. College Humor, a website known for its numerous comedy sketches, is now poking fun at the company as well. 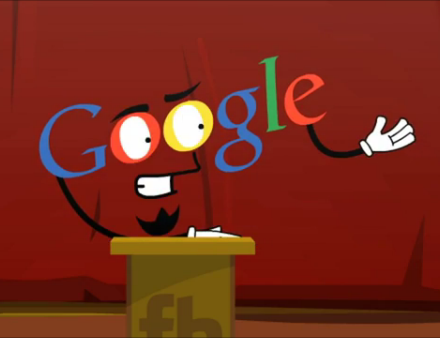 The animated video depicts the logos of various social networks speaking behind a podium one by one, cracking jokes about Facebook, while the others laugh. Facebook (or at least its logo) is also watching, and at least pretending to be having a great time.

The video touches on the issues many people are uncomfortable with when using Facebook, including the hard-to-configure privacy settings. There are several references to The Social Network, a movie released last year that depicts the beginning of Facebook, calling it "a lie" since "it made Mark Zuckerberg interesting". The "roast" also alluded to Mark Zuckerberg, who, according to many people who know him personally, has an Asperger’s-like behavior, and according to the talking Twitter logo, "the terms of service could be a more dynamic leader".

The sketch also throws a few jabs at other social networks, especially MySpace. When signing off, the talking Twitter logo introduced FourSquare as "the mayor of nobody gives a s*** anymore". The logo then proceeds to completely roasting MySpace, calling its "Delete Account" button more popular than Facebook’s "Like" button, then signing off alleging that MySpace is only popular because of all the "failed musicians" that still use the network as a distribution platform.

After the Foursquare logo steps off the stage, MySpace comes in for the final act, but is unable to finish its jokes. He’s then asked by an incredibly good-looking Reddit logo if he’s still using Facebook Connect, to which it replies "I don’t want to talk about it".

What first appeared to be a Facebook roast was completely turned against MySpace. I could keep listing out all the other jokes that were thrown around, but that would miss the real point: the tech crowd, the media and users complain about how much we hate Facebook, but then we rush right back to playing Farmville and tagging our pictures. Facebook manages to get away with upsetting its users because people, deep down, enjoy the service. The tech scene will keep throwing jabs at Facebook, but in the end we’ll all keep helping Zuckerberg built up his bed made out of cash.

I feel that’s the point this video tried to make, and in that respect, they were spot on.