Google has just launched a new experimental Chrome extension, which lets users share links with others that are within an earshot. Aptly called Google Tone, this new feature uses sound to transmit information from your computer as it is picked up by the mics in nearby ones.

Using sound to transmit information is not an entirely new idea, with Chirp for Android having been the first to bring such technology to consumers over smartphones. While Chirp was exclusively meant for the Android platform, Google’s Tone seems to be carrying a specific and to-the-point purpose for now, being able to share only URL addresses with other users nearby. 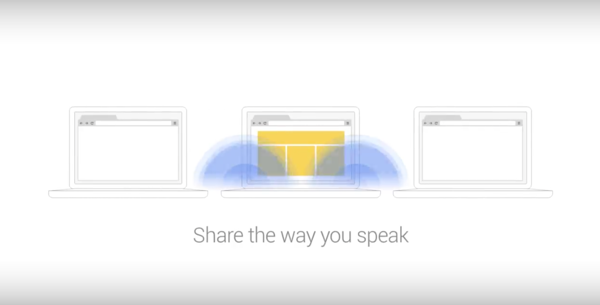 “The first version was built in an afternoon for fun … to exchange design files back and forth while collaborating on UI design, and to contribute relevant links without interrupting conversations.”

Being audio-based there are some inherent limitations to the use and effectiveness of this technology, of course. In a slightly noisy environment, the information – sound – cannot be carried that far, and any wall in between will block the transmission given how sound waves travel. According to the team behind the project, the very first version of the tool was pretty efficient but that was achieved at the expense of a horrible-sounding transmission. As a result Google says, “we played it beyond the range of human hearing. However, because many laptop microphones and nearly all video conferencing systems are optimized for voice, it improved reliability considerably to also include a minimal DTMF-based audible codec.” Apparently, this is reliable in a majority of audio environments even at lower volumes, working over Hangouts as well.

Google is admitting that while ideally every machine should be able to pick up on the sound in theory, “Not every nearby machine will always receive every broadcast, just like not everyone will always hear every word someone says.” However, if a transmission fails, resending is an easy task, one which usually involves an increase in the volume of the transmission.

Google Tone can be downloaded from the Chrome Web Store right now from the link which we have embedded below. Give it a shot, and let us know what you think about it.