Routers are among the oldest bits of technology out there right now, but that doesn’t mean they can’t be improved. At least that’s what Google seems to think, as the Mountain View-based company today unveiled the OnHub – Google’s new wireless router that promises to effectively and efficiently solve all your wireless connectivity woes. Interested? Read on.

The OnHub is a cylindrical piece of hardware that solves first and foremost the aesthetics issues with today’s traditional routers. On first look, you’re likely to mistake it for an Amazon Echo – they’re that similar looking – but there are subtle differences between the two that become visible easily (and no, we’re not talking about their essentially different functionalities either). OnHub is not a symmetrical cylinder top to bottom, with a larger circumference on top than at the base. It also is essentially cordless, which Google says aims to eliminate the tendency for hiding your router in a corner because it’s ugly-looking. Thanks to OnHub’s attractive design, you can proudly display it in the center of your home where it will be able to provide maximum coverage.

The second most important thing about OnHub is its easy and painless setup and troubleshooting. Android and iOS devices can connect to the device using a neat app that provides various pieces of important network related information. Other than that, it’s pretty barebones, at least for now. 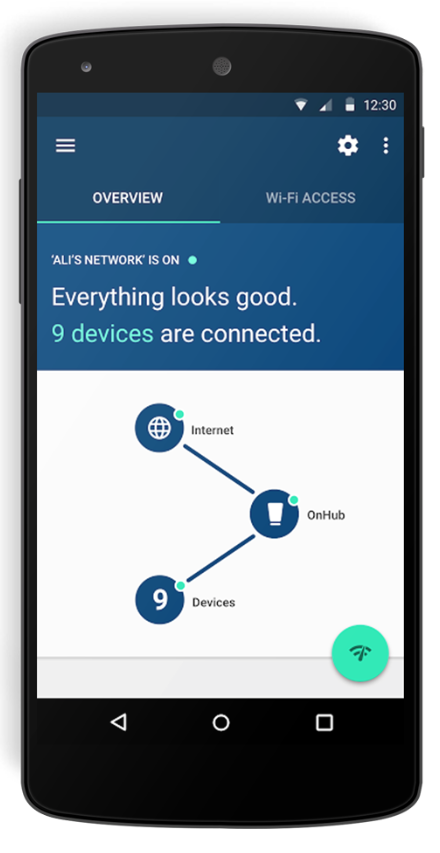 On the innards, the OnHub is powered through 13 antennas that should give it maximum and strong penetration through any kind of household. The router is smart and intelligent in a way that it will automatically pick the best channel for broadcast and can “prioritize a device so it has the fastest Wi-Fi for the activities that matter most.”

OnHub has support for 802.11 ac and 5GHz WiFi. Completing the tally at Bluetooth LE and Weave – Google’s interfacing for smart home devices. Hence, you can expect it to become a lot more than just a router.

Speaking of becoming a lot more, Google has promised several updates over the years to OnHub and new features via firmware updates. While they haven’t provided any details of what to expect, should the Chromecast be an indicator, we can expect ample improvements and new features in months to come. We’d be particularly interested to see what kind of smart home management OnHub will be able to provide in the future.

The OnHub has been created in partnership with TP-LINK, and will go on sale August 31st for $200. Rather steep pricing, like Apple’s AirPort Extreme and AirPort Time Capsule routers, but we hope it’ll worth the buck. Available in two color options, you can pre-order it today from Amazon.