Google Earth v7.0 For iOS Released, Brings 3D Maps To Millions Of Users Around The Globe

This month has been pretty big for Apple with ongoing patent issues with Samsung as well as the Wall Street earnings report and the release of OS X Mountain Lion into the Mac App Store yesterday. The end of this month also represents a fairly important time for the technology giants as their legal representative head into a trial with Samsung over alleged patent infringements with Apple looking to claim more than $2 billion in damages from the world’s largest smartphone vendor.

The hectic schedule of July however shouldn’t detract from the importance of last month. When Apple took to the stage at the Worldwide Developers Conference and announced their own 3D mapping system which would be a part of the official iOS 6 release. Apple delivered a cutting blow to Google who had previously supplied the map functionality in iOS. Not wanting to be outdone by Apple, the current kings of mobile mapping used their own developers conference later in the same month to announce that they would be bringing their own 3D maps to Apple’s mobile operating system. Let the battle of the advanced mapping begin. 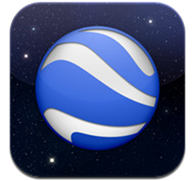 It remains to be seen whether or not Apple will actually care about Google beating them to the punch by getting their own 3D maps onto the iPhone, iPod touch and iPad before them. After all, Apple isn’t updating an existing platform or app and are instead building something entirely new from scratch to compliment the next major release of iOS. Android users can feel a little smug this time around as the update rolling out on the iOS platform today contains the same features which were pushed out to the Google Play Store nearly four weeks ago.

As part of the update, the Google Earth app now has 3D functionality for 14 major areas that included Los Angeles, Boston, San Francisco Bay and a whole range of others. Don’t be put off by the current limitation of the update, as Google is planning on staying on top of the game by regularly adding more 3D points of interest and locations that will hopefully soon reach over 300 million users.

If you are a user of the Google Earth iOS app and want to get ahead of the 3D game then simply download the Google Earth 7.0 update from the link at the end of this post. The app will still be available for all iOS devices that are capable of running iOS 4.2 or later, but due to the large amount of rendering needed to build the 3D layers on the device, the new 3D mapping options will only be available to Apple’s new devices like the iPad 2, the iPhone 4S and the new iPad.