If you’ve tried Mac OS X Lion, you’re probably familiar with its touch-friendly iOS-style scrolling. Just a few weeks ago, we reported on how to get old-style scrolling back on OS X Lion, but what if you want to bring this new form of scrolling to Windows? A simple script can do the trick, read on. 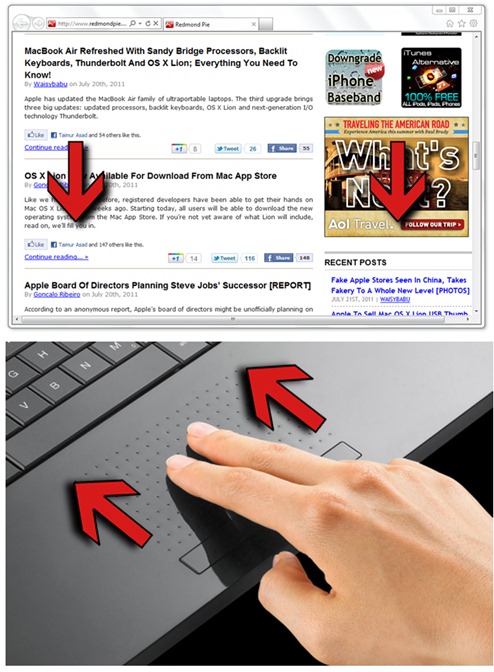 By default, when moving the scroll wheel up, Windows will automatically move any page up, and vice-versa. It’s been this way for decades, until OS X Lion (inspired by iOS) brought reverse scrolling to the table, which is more sensitive to the touch. If you’re looking to bring this form of scrolling to Windows, just follow the quick steps below.

Assuming you have already installed AutoHotKey, you’ll simply need to move your script to a safe directory and double-click on it. Once you’ve done that, the script should be running in the background and reverse scrolling should now be possible. It’s important to keep in mind that scrolling using the arrow keys or on the screen itself will work like it did before, just not using the scroll wheel.

There are several limitation to this tweak, which is not surprising, since it likely took its developers no more than 5 minutes to write. Scrolling isn’t smooth and fluid like it is on Lion or Mac OS X, and doesn’t have the elasticity effect found in those systems. In my opinion, reverse scrolling might not make that much sense using traditional computing interfaces like the mouse, just given the way the scroll wheel works. Yet, it does prove a point and while some users might just prefer traditional scrolling, it’s nice that there’s the choice.

OS X Lion, if you’re not already aware, is Apple’s new Mac operating system. The new operating system, which became available to consumers today, includes several new usability paradigms that were borrowed from iOS, the operating system that runs on iPhones, iPod touches and iPads, including the new reverse scrolling which we just showcased. Unlike previous versions of Mac OS X, Lion is available online only as a 4 GB download from the Mac App Store.