In this wonderful modern world that we live in, there isn’t really a great deal that can’t be proved or disproved by applying science and logic to the situation, but what about those instances when we want to generate results by using concrete? Yes, you heard me, concrete. Common sense should really dictate that when it comes to smartphones, gravity and rock solid concrete, there will really only be one victor, but when has common sense ever stopped us from doing anything?

The guys over at Android Authority have taken it upon themselves to lock their common sense away and to pit an iPhone 4S and a Galaxy S III against each other to see which will reign victorious in the smartphone versus concrete competition – like we don’t already know. This is probably a good point to mention that it is probably not a good idea to mimic the tests shown in the attached video and that your device is perfectly fine without the intervention of a solid external floor. 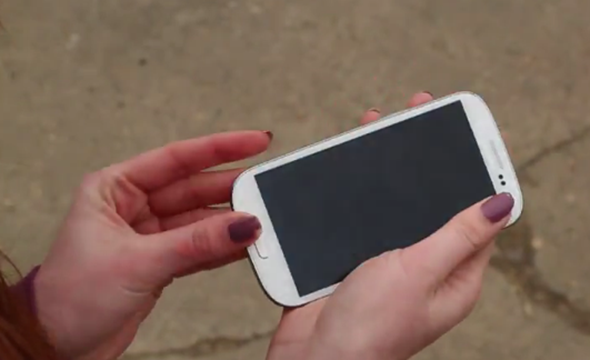 I am pretty sure that all owners of mobile devices have experienced that horrible moment after dropping their phone and seeing whether any damage has occurred to it, and in my experience it all depends on how the phone actually falls and at what orientation it lands. The test is trying to be as scientific as possible by submitting the two most popular smartphones on the current market to a series of falls, all from the same height and all dropped at the same three angles, putting gravity and manufacturer build quality do the test.

We have already seen that the Samsung Galaxy S III is UK’s most popular smartphone at the moment, pinning the white iPhone 4S back into second place after only four weeks on top spot. With the Galaxy S III only being released this week, this test may be of particular interest to those who are yet to experience a fall with their shiny new device. If I was a betting man and had to place my money on which device would come out of this in the best shape, then I would have to opt for the iPhone 4S as the build quality feels superior. However, as the video shows, neither phone manages to escape unscathed with the Galaxy S III literally falling apart as it hits the concrete and the 4S suffering from massive front and rear glass failure.

The lesson here seems to be a simple one – wrap your smartphone up in cotton wool and don’t let it anywhere near concrete.