In the current smartphone climate, it seems that everyone is talking about devices like the iPhone and Samsung’s extremely popular Galaxy S III, or mostly devices that are built around iOS or Android. In all honesty, it is a bit of a short-sighted position to take, and although companies like Nokia have been cast into the wilderness in recent years, they have always been known for producing premium quality hardware. And now thanks to their partnership with Microsoft, we could hopefully see a re-emergence of the Finnish company.

With Microsoft actively developing Windows Phone 8, Nokia could be one of the first large hardware producers to adopt the platform considering we are already aware that the fallen mobile giants already have one in the works. It must be daunting for any company to try and compete with Apple and Samsung at the present time, but Nokia has recently been responsible for producing the pretty awesome Lumia range of devices that have been received extremely well by consumers, hopefully setting the tone for what is to come in the future.

To whet the appetites of those Windows Phone and Nokia fans, it appears that the company is also working on building a mysterious new device that is separate to the Windows Phone 8 release, which we are already aware of. Leaked photographs that have emerged from a Chinese source which is reportedly showing the display panel from a new Nokia device that measures in at 4.3-inches diagonally. As is always the case with photographs like this, it cannot be immediately verified as genuine, but if it does turn out to be real, then the new Windows Phone 8 logo on the bottom of the panel gives away the operating system which will power it. 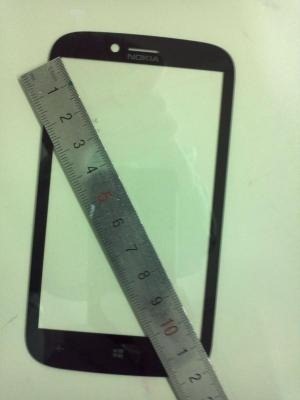 It remains unknown just what moniker this new device will be released under, or when, but the fact that it contains a rather large display as the focal point, then it could point to it being released as a high-end device. With Apple about to announce their new iPhone with an elongated screen and Samsung already being a fan of massive displays, the market trend seems to be moving towards more visual real-estate for users. Stay tuned Nokia fans, the good times could be around the corner.