Fring is a London-based company that develops a well-known instant messaging client for iOS. After improving its client for the last few months, the company is finally taking it a step up: bringing multi-person video conferencing to the iPad. This is the first App of its kind on the iPad: while the native video calling app, such as FaceTime, only allows 2-way video chats. 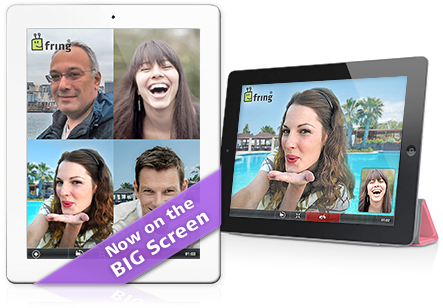 In a rather humorous video, the company claims it has discovered that the human head is the exact same size as the iPad’s screen. Fring then points out that a good application for the device’s screen would be group video chats.

This App has the advantage of being fully cross-platform, allowing iOS users to chat with their Android or Symbian buddies, and also be able to connect through both Wi-Fi and 3G network, unlike FaceTime which is Wi-Fi only (at the moment).

Fring is empowering tablet users to unleash the power of their 9.7 inch screens beyond movie watching and gaming to rich, fun personal video communication, […] With Group Video on the iPad, we are changing face to face video chat. Users will now be able to video socialize on big screen tablets enjoying seeing their friends wherever they are- as they commute, sunbathe at the beach or wait for coffee at a café.

According to the press release published by this company, the user experience provided by Fring is intuitive and should get any new user started within minutes. Indeed, the user interface looks clean and appealing: 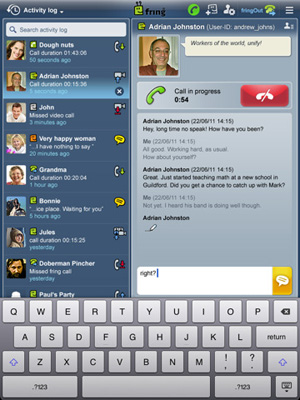 Fring arrived on January 2007 as a text-only instant messaging tool, even before the iPhone first hit the shelves. At the time, it worked primarily with Nokia phones, and Windows Mobile later that year. It arrived on the iPhone App Store over one year later, in October 2008, but it wasn’t until December 2009 that it added video chatting capability. The iPad release marks the next stage of Fring’s evolution.

If you own an iOS device, you’re free to grab Fring from the iOS App Store today. Whether you’re using an iPad or a smaller device, you’ll have access to the multi-person conferencing, although the iPad is experience is by far the prettiest.