Foxconn Goes Hiring Crazy In Preparation For Next iPhone

Foxconn, the main manufacturing company of Apple products, is reported to be hiring in large numbers to support the Cupertino company’s demand for the next iPhone. The device, which contrary to previous reports, appears not to be in production at this point in time, will require the Chinese manufacturer to ramp up its workforce, and according to a report over at M.I.C. Gadget, thousands of jobseekers are congregated outside of Foxconn’s Chengdu plant, looking to get in on the extra work.

Despite the job not being particularly skilled (good vision is the only requirement), there are plenty of folk turning out. According to M.I.C. Gadget’s report, most applying are students currently looking for summer work, so competition is fierce. Strangely enough, the predominantly young workers must stump up a "registration fee" of 150 Chinese Yuan, which equates to around 24 U.S. dollars. 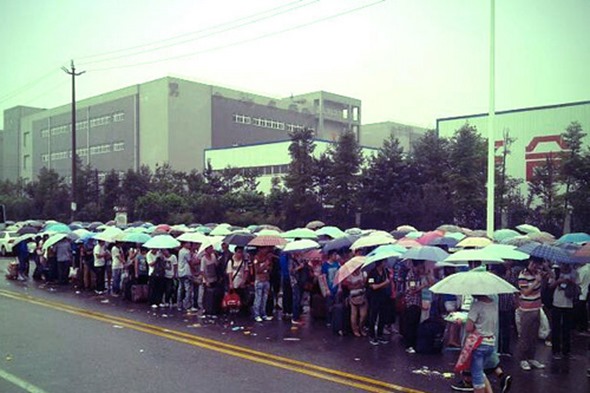 Given the stories we’ve heard in the past with regards to poor low wages, poor working conditions, and lackluster health and safety procedures, one might have thought – given the additional taxation – people would be put off applying for a job at Foxconn. Then again, at this stage of summer, most of the temporary work will have been taken, and these already broke students have very little choice but to cough up the money in the hope of securing a couple months’ work.

As well as the iPhone, the Cupertino company is hotly rumored to be releasing a smaller iPad later this year, dubbed the "iPad Mini" by the blogosphere, and if this does indeed turn out to be the case, the workers should see plenty of overtime. Then again, rumor has it the device is being manufactured at Foxconn’s plants in Brazil, if the smaller iPad is indeed in existence.

Foxconn’s Zhengzhou plant is also said to increasing its workforce, a situation which ties nicely in with earlier reports that the next iPhone will go into production towards the end of the summer.

The next iPhone, unofficially referred to as the iPhone 5, will pack NFC technology, 4G LTE, and looks to be the first ever iPhone to feature a display larger than 3.5-inches.

Expect it to arrive between September and October of this year.