FolderEnhancer For iOS 7 Finally Released, Get It Now!

FolderEnhancer by Lance Fetters has been one of the longest running and widely supported packages available on Cydia. When Apple introduced the ability to create folders in iOS, it was generally accepted that the implementation was a long way off from being perfect. FolderEnhancer for iOS was thought to be the answer to that lack of perfection, introducing a number of powerful enhancements that made working with folders on iOS 4.0 and higher almost a pleasure. iOS has progressed significantly since those days, as have Apple’s implementation of home screen folders. With that said, there is always room for improvement, which is where FolderEnhancer (iOS 7) steps into the limelight.

The developer behind FolderEnhancer openly admits that Apple implemented a number of the best parts of the tweak into the current version of iOS. Developers in the jailbreak world are used to receiving that kind of "flattery" from Apple engineers so it doesn’t come as a surprise. FolderEnhancer (iOS 7) is a totally separate package from the original release and offers a number of features that improve the iOS 7 implementation of app folders. 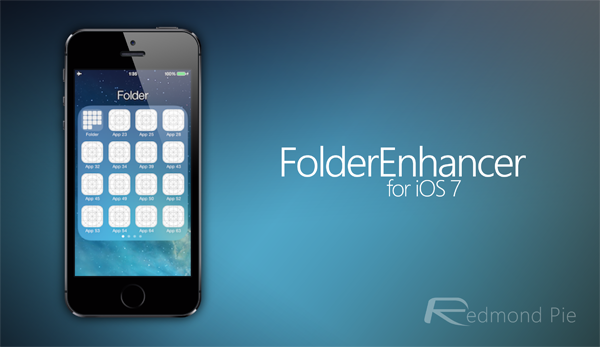 One of the first offerings, and potentially one of the most important, is the folders in folders feature that allows folders containing a number of apps to be placed directly into other folders. I personally would never want that layer of complexity on my device, but it does seem to be one of the most requested feature by users. Fetters has also built in the ability to have larger folders that can can make user of various layouts to house a larger number of apps. One of my personal irritations with iOS 7 is Apple’s reluctance to use all of the available space on the screen to allow for larger folders.

The new FolderEnhancer also comes with a number of familiar settings that add polish to the extension and allow users to tailor it to their own tastes. Animations can be turned on and off at will as a settings option. There is also the option to toggle whether or not folders should close on app launch as well as choose if a press of the Home button should automatically close all open folders. Fetters has already announced a number of additional features are planned for a future release, but until then FolderEnhancer (iOS 7) is a worthy addition to any jailbroken device.

You can download FolderEnhancer (iOS 7) from the BigBoss repo and is available as a free download to those who already have the classic version of the tweak installed.