Android has been somewhat slow when it comes to catching up with official software from the big guns out there. Today, another baby step was taken when the official Flickr app for Android was made available for download on the Android Market.

For the uninitiated, Flickr is one of the biggest photo sharing network on earth. With millions of users actively sharing images from around the globe, the official Flickr app missing from Android was a huge gap which was begging to be filled. Today, that gap has been bridged by Yahoo!

Features:
• Share photos only with the people you want to with easy privacy settings.
• Full screen browsing and slideshows for your photos, your contacts photos or any of the public photos from the global Flickr community.
• Share the story behind your photo with titles, descriptions, comments and tags.
• Keep your track of where you took your photo by keeping your location data automatically through geotagging. 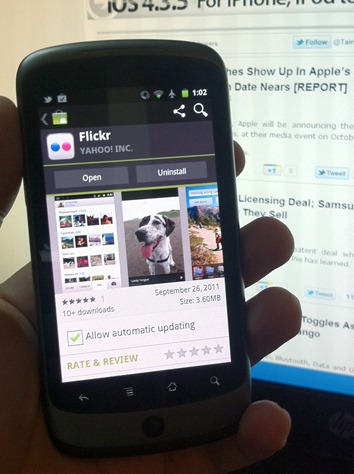 Having tried the app on our trusty old CyanogenMod touting Nexus One, we can confirm that the app does what it should the moment it is downloaded from the Market. The app itself comes with a few surprises, mainly in the department of how you upload images. Apart from the regular feature of uploading photos directly to Flickr from the built-in Android Gallery, you can take photos directly from the app itself with its very own integrated camera app, which is super easy to use.

You also get the option to share your creativity with users on two of the most popular social networks out there, namely: Facebook and Twitter. The highlight feature of this app are built-in photo filters and effects that you can apply to your photos, ä lä Instagram for iPhone. 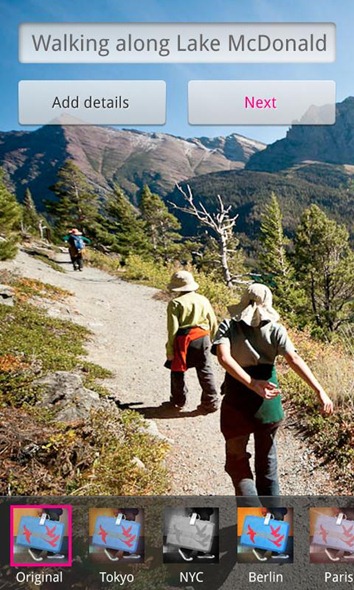 If you’re not already on Flickr, then signing up is not a big deal, you can either sign in from your existing Yahoo! ID, or you can create a new Flickr account right from your Android device and start sharing with the rest of the world in a matter of minutes.