Xbox One is one device that isn’t just for gaming, and the company is out to prove that in full force. The newest gaming console from the Redmond company has been touted several times as a multi-purpose home entertainment system – something that you would frequently use for more than just gaming – and the company’s latest ad for Xbox One takes that fact even further. This time, Microsoft is targeting National Football League (NFL) fans directly, showing off Microsoft’s Fantasy Football system for the Xbox One and more.

The new ad focuses on football fans by showing off Xbox One’s exclusive Fantasy Football system, as well as the interactive broadcasts of NFL that will be available only on the (gaming) device. Not only that, since Microsoft is so pushing for Skype’s growth past its acquisition of the VoIP service, the ad also showcases how Skype can be utilized in real-world scenarios using the Xbox One – amidst screaming hordes of football fans, of course – and still be of value to consumers.

The ad brings the next in the series of promotion that are a direct result of Microsoft’s partnership with the National Football League. The initiative, dubbed NFL on Xbox, aims to make Xbox One a must-have experience for football fans, through delivering content that is proprietary to Microsoft and engaging for the consumers. This particular ad, which precedes the actual release of the console, doesn’t depict the console in the light of what it’s primarily intended for – gaming – but instead, exhibits it as a full-time entertainment device. NFL on Xbox basically allows you to watch games live, enjoy the Fantasy Football league, and also enjoy personalized and tailored to your taste highlights of actual games. It’s pretty refreshing, actually, and shows that you can, indeed, use the Xbox One as more than just a gaming console when it becomes available. 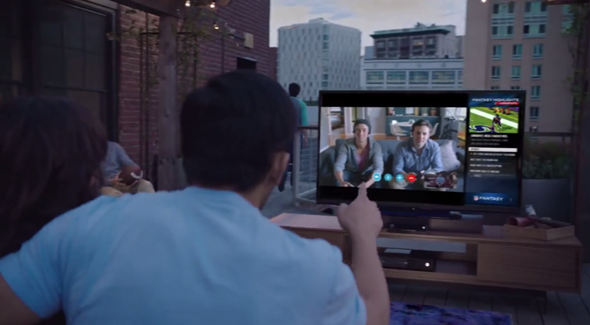 With the evident shift in the Redmond giant’s marketing strategy, not just towards its Xbox console but also Windows Phone and Windows RT devices, it’s more than clear that Microsoft’s is aiming big towards capturing the entertainment and productivity market beyond desktop operating systems. If anything, the recent acquisition of Nokia also appears to be a connecting dot, and we can expect to see a lot of similar ventures in the future.