First Nokia Windows Phone 7 Handset Shows Up In Photos And A Brief Video!

It’s been a bad few months for all involved with Nokia. A new head-honcho in Stephen Elop, a deal with Microsoft to use Windows Phone 7 that threatened to split the company in two and a lack of any kind of roadmap for the future have all caused many pundits to write off the once proud Finnish mobile phone manufacturer. But things might, just might be on the up for Nokia. 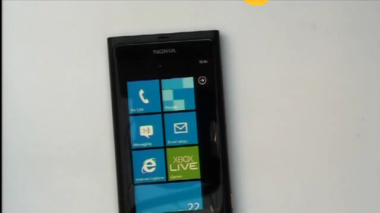 Well, on the up if you can get past the whole ‘company-saving-phone-is-leaked’ angle of course.

It’s obviously no secret that Nokia is moving to Microsoft’s Windows Phone 7 as the software to power its slick hardware, and it’s already known that Elop and co. are hoping to get handsets into the hands of eager punters before year’s end. Until now though, we’d no idea what such devices may look like and certainly nobody outside Nokia had seen the WP7 operating system run on a Nokia badged phone. Until now.

A new video has surfaced courtesy of Technet that shows a confident-looking Stephen Elop asking the audience to turn off their recording devices so he could show them something ‘super confidential’. Unsurprisingly, somebody didn’t listen and equally unsurprisingly, the video has found its way onto the internet.

Now when I say unsurprisingly, that’s because I don’t believe for one second that this is an unintentional leak. Surely somebody of Elop’s experience and knowledge would know that any request to turn off recording equipment would result in the exact opposite happening. Show and tell’s like this have a habit of leaking out to the blogs, and despite Elop’s protestations to the contrary I’m almost certain that was exactly what Nokia wanted. You can get a quick glance of WIndows Phone 7 running on the Nokia device, courtesy Winrumors:

But anyway, what did we see in the video?

Well, for all intents and purposes the hardware was an N9 but with the added camera shutter button Windows Phone 7 handsets sport. Gorilla Glass, a Carl Zeiss camera lens and a shiny – and dare I say it sexy – finish were all present and correct.

Whether the introduction of a WP7-wielding product will propel Nokia back to the top remains to be seen, but we at RedmondPie can’t wait to get our hands on a Nokia branded Windows Phone 7 device as soon as possible.

Did anyone not filming the event manage to pocket one, then?