Every iPad Ever Made Faces Off In Speed Test Showdown [VIDEO]

Up until the latter stage of last year, Apple had been somewhat slack in its upgrading of the iPad, and even the fourth-gen model – despite its Retina display and faster CPU / GPU – wasn’t deemed a particularly big leap from the iPad 2. But with the iPad mini hitting the scene last October followed by the Retina iPad mini 2 and iPad Air just recently, the iPad range is now a larger and more diverse product line.

As we’ve seen with the many iPhone comparison videos through the generations, it’s always intriguing to see how newer models stand up against those from the past, and iClarified has run a rather interesting boot speed test including every single iPad released to date. Check it out in the embedded video after the break! 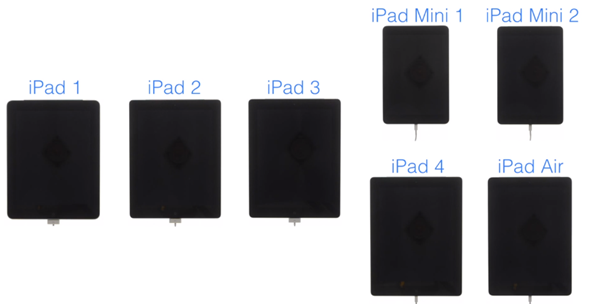 The iPad Air and the Retina iPad mini are both all-but technically identical, and although, as we’ve learned through the various benchmarking tests, the Air’s clock speed is slightly superior to that of the smaller model, the everyday user would almost certainly notice no difference between the two. This notion of both A7-powered devices being on an even keel is further accentuated in the iClarified speed test, which sees both boot up at almost the same time. The larger Air manages to boot in 18.375 seconds, but the Retina mini doesn’t exactly lag behind with a time of 18.958.

Intriguingly, the next fastest device was the inaugural iPad, which was the only model outside the latest two to post a sub 28-second time. It’s 27.542 second boot time is slightly quicker than its eventual successor, which managed 28.5 seconds. The iPad 3, meanwhile, took almost 36 seconds to boot – double the time compared with the new iPad Air, and although the first-gen iPad mini was the slowest with a time of 36.333 seconds, it’s incredible to think that the Air boots up in half the time it took last year’s first flagship release.

What the comparison does show, more than anything else, is just how much better the Retina iPad mini and iPad Air are than the others. We can all marvel at the beautiful design and form factor, but ultimately, both the iPad mini 2 and its full-size cousin are streets ahead of anything that the Cupertino outfit has released hitherto.