Long term users of a Mac will no doubt recognize the feature as being first implemented into Mac OS X 10.4 in 2005 after being announced at the 2004 Worldwide Developers Conference. The iOS version is limited in functionality compared to the desktop version, but still serves as a functional search system for the popular mobile range of devices.

Although an extremely useful feature, I know from personal experience that Spotlight is sometimes considered to be a forgotten feature, and is something that I am pretty sure isn’t used to its full potential. I can count on one hand the number of times I have actually used Spotlight to search my device for things.

It seems to be the norm in circumstances such as these, an iOS developer known as ‘coffeejay’  has stepped up to the plate in an attempt to increase the power and functionality of the Spotlight feature. CommandSpot is a new tweak which hooks directly into Spotlight, with the intention of adding full speed, enhanced functionality with added support for native application launches. 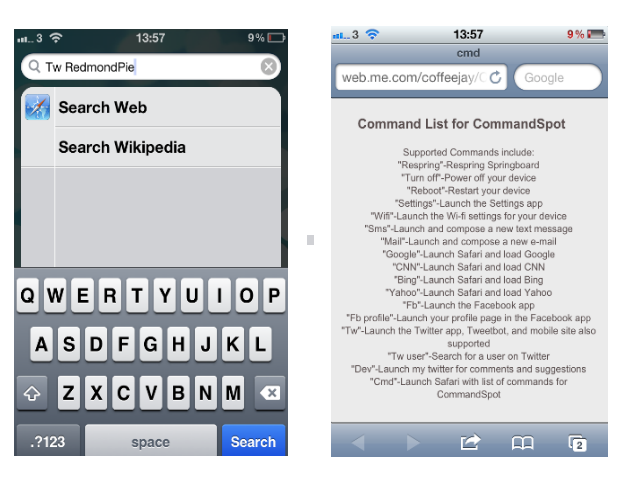 CommandSpot allows Spotlight to be thought of a quick launcher, which accepts users commands to perform certain system actions, along with launching native applications. CommandSpot comes with a list of predetermined commands which limit what the user can and can’t do with this tweak, which are listed below:

As you can see, CommandSpot offers quite an in depth array of options as standard. If you are struggling to see what is possible using this tweak, you can also use the command ‘cmd’ with Spotlight and it will launch Safari and provide a list of the available options.

One worthwhile addition in the future would be the ability to users to teach the tweak to add their own commands to perform personalized actions. CommandSpot is a tiny download at only 5.1kb and is available free of charge via the ModMyi repository.