If you can recall, a few months back we brought you information about a rather impressive little piece of software, which allowed any compatible iOS device to be mirrored to your Mac or PC’s display for the ultimate gaming experience. The aforementioned app, AirServer, can be thought of in the same way as using an Apple TV to display or stream content from an iPhone, iPad or Mountain Lion powered Mac to a TV or monitor.

With Apple pushing out the final build of iOS 6 just a while ago, the AirServer team has taken the opportunity to push out an update of their own that re-engineers the software for use with the iPhone 5 and Apple’s next major release of iOS. The powerful new update has been carefully worked to seamlessly work with the new hardware and software releases from Apple and even includes a hidden HD feature that isn’t even available on the Apple TV units yet.

The latest version of AirServer is capable of delivering full 1080p high-definition mirroring and content streaming from compatible devices, and also has additional compatibility included to offer users support for those on-demand media apps that are becoming more and more popular such as Netflix and Hulu. Keep in mind that these features are not officially supported by the latest Apple TV 3G, and AirServer has some tricks up its sleeves to enable them.

There’s a lot of discussion at the minute in the iOS development community as developers rush to push out updates for their apps to support the new iPhone 5’s display, but the AirServer team seem to be a few steps ahead with this new version and already support the 1136×640 screen resolution of the new hardware.

It isn’t just a case of being able to watch movies either. AirServer allows apps such as Safari and the new iOS 6 Maps app to be mirrored in full 1080p, meaning that full-screen browsing or flying over cities in Maps will look absolutely stunning. Existing users will be able to grab the update free of charge with the Windows version of AirServer hitting version 1.0 and offering audio, movie and photo streaming. 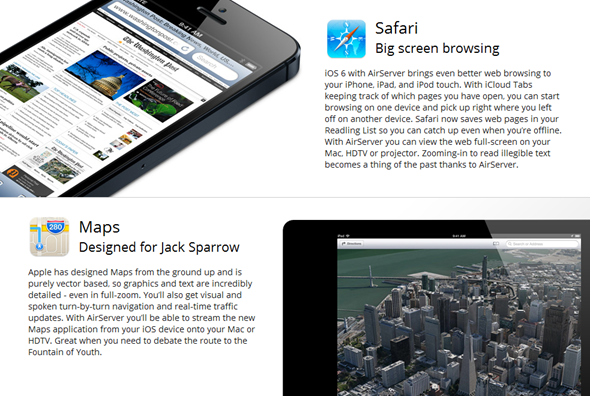 For those who are yet to experience the power of AirServer, there is a free seven day trial available that can be used on one machine PC/Mac only. Additional license options include a standard license for use on five machines, a student license for use on three machines or the purchase of a fifteen machine license.