For those Mac users who are running OS X Lion, version 10.7.3 or earlier, the time has come to fire up the Software Update app and download the Lion goodness which Apple has pushed out today. The Cupertino company have seen it fit to release OS X Lion 10.7.4, an update that features a number of important security fixes, some general improvements, as well as an update to the Safari browser.

One of the main improvement that comes bundled with OS X 10.7.4 is a fix for the bug which left users’ FileVault passwords stored outside of encryption in easy to read plain text. Before the alarm bells start ringing, it is worth noting that this issue only occurs for those OS X users who upgraded to Lion from a previous installation of Snow Leopard. For Macs that came with OS X Lion installed as standard, the issue is not relevant.

One relatively small, but increasingly frustrating issue that centered around having the ‘reopen windows when logging back in’ check box has also been fixed with the update to the delight of myself. The official update changelog shows that Apple has also addressed a number of issues pertaining to saving and copying files to and from a remote server, as well as offering the good old Brits some additional support for any third-party USB keyboards they may decide to use with their Mac. 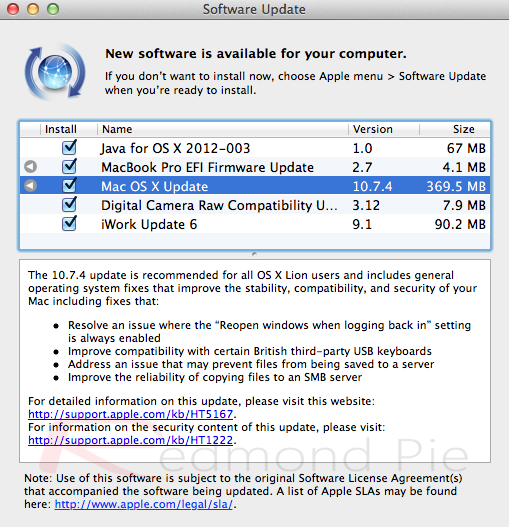 A lot of the official documented changes are simply improvements to various aspects of the operating system, which time will tell if they make any significant or tangible difference. With a large number of Lion users being less than happy with the performance of Apple’s latest OS, they will be hoping that the OS X 10.7.4 improvements will be immediately noticeable.

One of the more prominent upgrades featured in this update is the inclusion of a new version of the Safari browser. As with the rest of the additions of this update, the latest version of Safari brings minor stability improvements, with Apple adding no further information. For detailed information and an extensive list of the changes, users can head on over to the official Apple support page or check out the security content of the update.