For the last few months, Apple has been intensively testing iOS 6.1, the next minor update for iOS 6. Up until now, only developers willing to spend $99 per year on an Apple developer subscription had access to beta copies of this release, but now that the final version is upon us, everyone can take advantage of it. Here is how to download it right now.

If you are expecting flashing new features from this new release, you might be disappointed, since it doesn’t include many. Instead, iOS 6.1 is a simple bundle of improvements to the original iOS 6 release that have been requested by both users and developers.

Among the additions, a few stand out, such as an improved set up wizard that confirms your Apple ID and password for iMessage and FaceTime (you won’t see this unless you wipe out your device), improvements to Passbook including a new sample card, a “Voice Dial Only” switch for Siri which prevents it from carrying out any tasks other than calling contacts (quite useful in case you need to call somebody quickly without having Siri launch iTunes and waste a good minute of your time trying to close it off). Surprisingly, there is also a new cellular data option for iTunes, allowing users to download content, including songs and podcasts, off iTunes over 3G or 4G when Wi-Fi isn’t available: this is turned off by default; think twice before switching it on unless you have a large data cap. LTE support for 36 more carriers has also been added.

Surely, this release is not the next big thing by any stretch, yet it includes many small improvements that will surely be welcome by some users (especially those who have always wondered why they had to be on a Wi-Fi network in order to download iTunes content). Surely, Apple is already hard at work on an upcoming major upgrade for iOS, although, for the time being, iOS 6.1 will be enough to keep iPhone, iPod touch and iPad users happy.

The main focus of this update is support for additional LTE carriers worldwide, improvements to Siri, which now lets you purchase movie tickets through Fandango in the U.S. Apart from that, the update does not bring with itself anything big. If you’re an iTunes Match fan however, then iOS 6.1 now allows you to download individual songs from iCloud, not exactly earth shattering, but it’s now there for those who require such a thing. And the oh-so awaited bug fixes which might’ve been facing since long are also there. 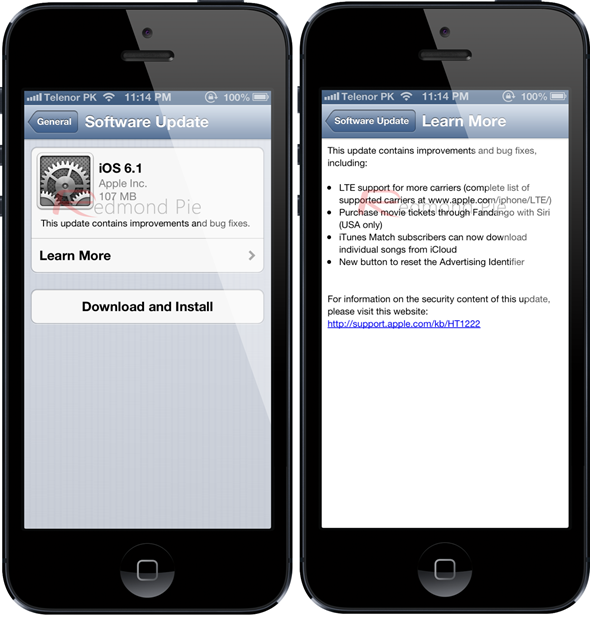 You can easily update your device over the air through your device’s Settings app, or via iTunes. Otherwise, if you wish to download the IPSW yourself, we have put together a list of direct links. Simply click on the link that is right for your device: