The problem with running on old software is, you’re always likely to be left behind. In order to coerce consumers into updating or upgrading, the newest software is developed first, and anybody left behind is, well, simply left behind. While those on Windows 8 can already enjoy Internet Explorer 10, anybody still straggling on Windows 7 will still be waiting for the new version, and although it’s not quite ready for end-user release, a preview version has now been dropped by Microsoft.

Internet Explorer was once the de facto browser for the PC user. Installed by default on any Windows PC, it may have won the battle with Netscape, but since the nineties, the Redmond company’s flagship browser has really lost its way – now sitting behind Mozilla Firefox, Google’s rampant Chrome, and Opera in the pecking order.

It’s taken a while, but in fixing up Windows from the dire straits of Vista, Microsoft has been working to improve all aspects of its software – including the once-forgotten browser. IE 10 – for those that haven’t tried it – is every bit the modern browser, and although it has much work to so if it is to displace the likes of Chrome and Firefox, the positive beginnings of Windows 8 will surely provide solid foundations. 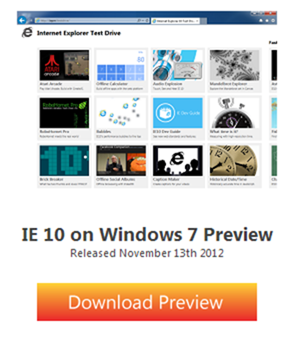 If you wish to download the preview version of Internet Explorer 10, please check out the link below. It’s going to be tricky for Microsoft to convince users to make the switch to its native browser – particularly since the majority of those running the popular choices have all tried IE at one level or another. Still, with the positive reception of Windows 8, the continual success of the Xbox 360, and the optimism surrounding the Surface / Windows Phone 8, the software maker still has a relatively decent shot at flogging what was once looking like a dead horse.

Check out the Windows 7 Activity Center to discover more apps and info for your Windows 7 computer.