One of the great things about mobile devices like the iPhone and iPad is that they allow professionals to conduct their day-to-day business from pretty much anywhere that has a data connection. That comes as a great help for those who are constantly on the move and are unable to whip out a notebook to access mails or other work related documents. That is partly one of the reason why iOS and OS X productivity apps are so popular, with DocuSign Ink being one of the current hits on the App Store.

The name of the app pretty much gives away its functionality, as it exists to let iOS users quickly sign documents without having to go through the laborious process of signing, scanning it back and then emailing it to wherever it needs to be. At the end of the day, printing something isn’t always possible, and if you are anything like me then you’ll prefer to stay away from printers altogether. OS X users have this functionality built-in to the Preview app that ships with the operating system but Apple doesn’t bundle any similar apps with iOS. 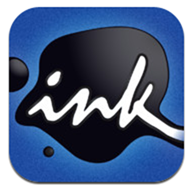 DocuSign Ink has the benefit of being able to pull documents directly into the app from cloud storage providers such as Google Drive, Dropbox and Box, as well being able to open PDFs and Microsoft Office Documents that are already on the device or are accessed through alternative means such as email. The feature list of the software is pretty extensive, with the developers going a little above and beyond in most areas to ensure that it is one of the best apps available in its class. One of the best features is being able to send any type of document that requires signing, and to actually receive a notification back in real-time that tells the user when the document has been digitally signed. 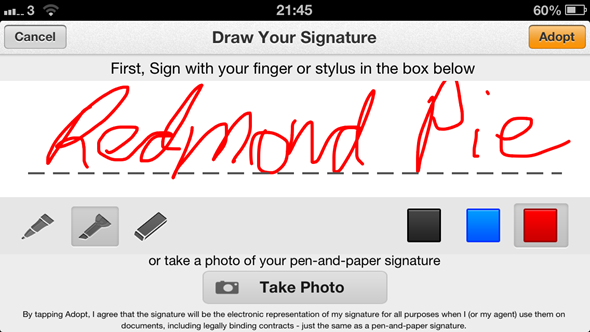 The user-interface of the app is very well put together and adopts the side navigation menus that have become so popular recently thanks to the likes of Facebook and Path. It is also fully optimized for the iPhone 5 and iOS 6, meaning that the full screen real-estate is used efficiently for those who are lucky enough to already have their hands on Apple’s latest smartphone. The DocuSign Ink app is a free of charge download with limited document sending being available before an in-app purchase is required. 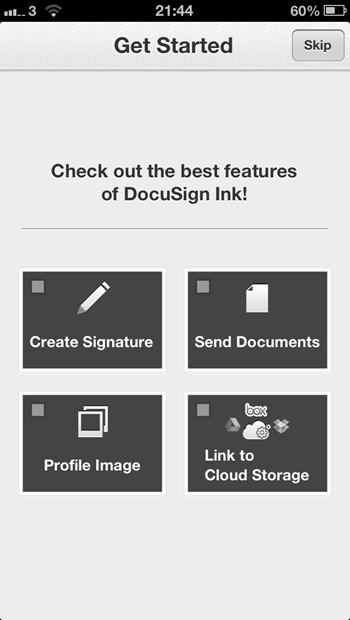 (Source: DocuSign Ink for iPhone, iPod touch and iPad on the App Store)