Did The Next iPhone Just Leak Out Of Foxconn? [IMAGE]

The iPhone 5, the New iPhone, the next-generation iPhone, Apple’s latest iPhone. It doesn’t matter what you are personally calling it or what you think the actual official name will be when the eventual time comes for release, the bottom line is we all want to see it and find out what they have in store for us. It has become part-and-parcel of the release build up for any iOS device that we see leaked parts and speculated technical specifications galore, and it has certainly been no different this time around. But could this new leaked image actually be of the official next-generation iPhone?

The source of the possible leak is China, with a case manufacturer having a range of product images that show their wares fitted nicely around what could possibly be a smuggled out iPhone 5. The device that is actually sitting snugly in the molded case seems to fit the description of what we will be getting from Apple when the phone is eventually released, but surely no Foxconn worker has the guts to slip out of the factory with a functional iPhone 5 in their back pocket?

We all know that an actual leaked or misplaced iPhone isn’t beyond the realms of possibility. It is after all something we have seen happen in the past, although Apple believes that things are little tighter these days at their manufacturing plants. Due to the fact that the iPhone 4S was released in October of last year and we have already passed the traditional June WWDC announcement, then it is highly likely that Apple is eyeing again for an October release of the next iPhone. 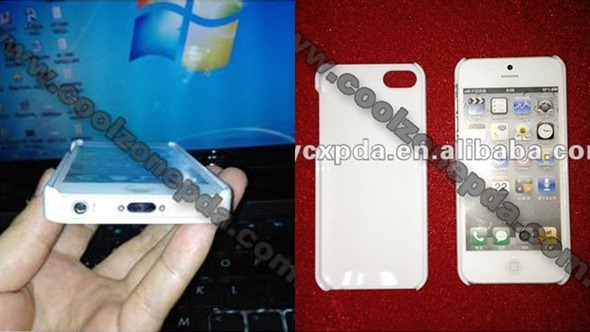 The purported smuggled iPhone that is visible in the images seems to also conform to design standards which we are expecting, with a smaller dock connector port and the 9mm headphone socket located to the side bottom of the device. The images that are being used by the case company are of such poor quality that it just doesn’t ring true. Besides, if a company like that had the device before anyone else, they would surely be making song and dance about it in an attempt to cash in and promote their own products. Anything is possible in this world, but this seems like a step to far.