Cyber Monday has finally arrived. Millions of consumers all over the globe are expected to utilize their existing technology to scour the Web for the best Cyber Monday deals out there, with the aim of grabbing some new gadgets at bargain prices. Reductions and money-saving deals aren’t exactly alien in the tech world, but Cyber Monday has historically presented consumers with much deeper discounts. To get you up and running, we have scoured the Web for some of the best Google, Microsoft and Apple deals available during the course of the day. 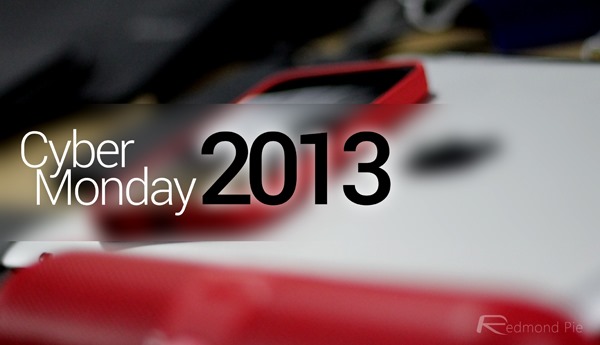 Moto X – Google owned Motorola Mobility is keen to spread the savings for one day only. In an effort to get their hardware in the hands of as many consumers as possible, Motorola has dropped the price of Moto X on an off-contract basis by $150. The slashed price means that individuals looking for a new powerful Android device will be able to pick the 16GB Moto X up for only $349.99, with the deal being offered on all major networks. Motorola has warned via their official Google+ page that supplies of the reduced device "will be limited" so it’s best to strike early on this one.

Samsung Galaxy S4 – The Galaxy S4 is arguably still one of the most accomplished and capable Android devices on the market. And now UK based customers can grab it for free on a minimum-term contract. Carphone Warehouse is operating one of their extremely intriguing "Flash Sale" promotions until 11:59pm this evening that will see the S4 reduced by £229.00. The deal will be available to those who take out a 24-month contract with O2 or Vodafone starting from £25.00 per month.

HTC One – We recently heard that Android KitKat will be coming to the HTC One by the end of January 2014. That promise of the latest and greatest version of Android will undoubtedly entice a few customers in, and now they can get it for free on a 24-month contract from AT&T, Sprint or Verizon. Although AT&T is offering a one-day discount on the HTC One, Amazon is also offering a fully reduced pricing structure when the hardware is purchased on a qualifying minimum-term tariff.

Nexus 7 – The iPad may currently be the world’s most popular choice, but we imagine that the fabulous Nexus 7 isn’t far behind in terms of popularity with those who’ve used it. As part of the Cyber Monday offering, Staples is applying a $30.00 discount to the 16GB Nexus 7 tablet, taking the price down from $229.00 to $199.00. The company is stipulating that supplies may be limited with the discount being revoked at midnight tonight.

Google Play Books – Not resting on its laurels, Google has announced up to 75% on 100 of its bestselling books. Head on over to the Play Store from your device for more details.

The Redmond based company has been offering a number of fantastic gaming titles, add-ons and movies at reduced rates over the weekend but they also have some Cyber Monday specific deals. Xbox gamers can take advantage of a number of savings by grabbing games like Red Dead Redemption, Far Cry Blood Dragon, The Witcher 2, Rayman Origins and L.A. Noire with 75% off. 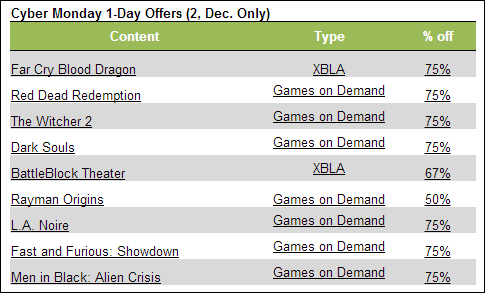 There also savings of up to 40% to be had on newly released SD and HD movies for USA and Canada based Xbox owners. Here’s the complete list: 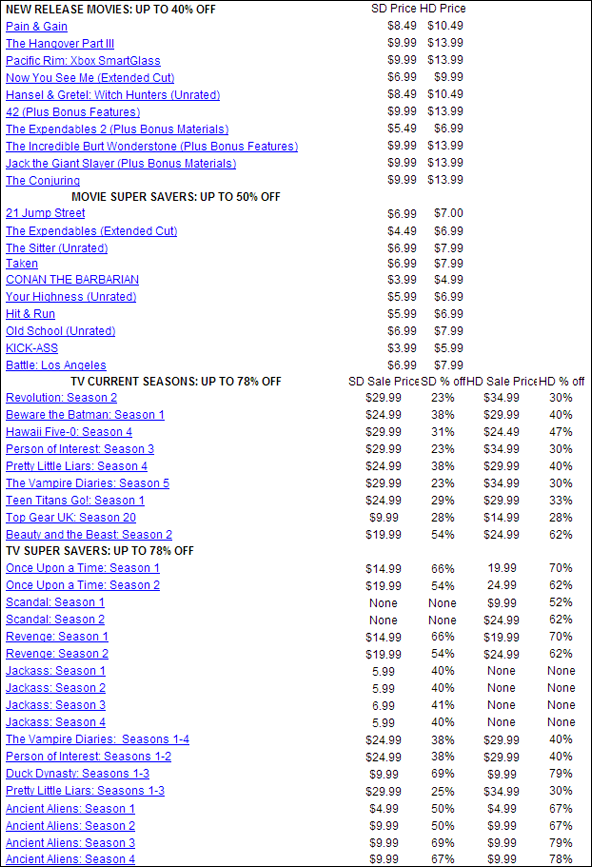 It wouldn’t be fair for Staples to offer a monetary discount on the Nexus 7 and not show the same attention to the iPad. In an effort to appeal to Apple fans Staples is offering the Space Gray, 16GB Wi-Fi only iPad Air for $449.00. That represents a $50.00 saving on the usual $499.00 list price and once again will be offered until the limited inventory runs dry or until midnight this evening, whichever comes first.

It’s fair to say that Apple hardware will be eagerly snapped up during the course of the day. In an effort to ensure that most of the reduced Apple business goes through their books, Amazon is offering a number of relatively minor but still effective savings on Apple’s range of Mac computers:

Apart from the deals which Amazon is offering, Mac Mall is also offering a handful of discounts today on select MacBook Pro, MacBook Air and Mac mini hardware.