Convert Your iPhone 5 Into Gold iPhone 5s For Just $2

The iPhone 5s, which Apple launched some ten days ago, has proved incredibly popular across many markets, and at this moment in time, the company is struggling to ship in the numbers demanded by the consumer. But while the handset itself is difficult enough to get hold of, the new Gold model is a particularly scarce commodity, and with eBay sellers offering the device at up to and in excess of double the retail price, some Chinese customers have taken less expensive measures to achieve that champagne finish in the form of sticker-based conversion kits.

As we saw last week with Mobile Fun’s so-called “upgrade kit” turning an iPhone 5 in White & Silver into a Gold iPhone 5s, these two-dollar conversion kits help those stuck on the now discontinued iPhone 5 feel like they’re rocking something a little more up-to-date.

At this point in time, the Gold iPhone 5s is essentially gold dust. The vast majority of Apple Retail Stores are sold out, and even those ordering online have only been offered a vague “October” shipping bracket. The fact that the Space Gray model (although significantly different to the old Black & Slate iPhone 5) doesn’t feel particularly new, allied to the Silver remaining largely unchanged from the White & Silver iPhone 5 has placed even more importance on the Gold model. Whether it’s the fact that it’s gold, the fact that it’s simply something new, or a combination of the two, the Gold iPhone has iPhone fans captivated, but if you do happen to have a white iPhone 5 and all you’re really looking for is a bit of goldness, grabbing some stickers would seem a much cheaper option. 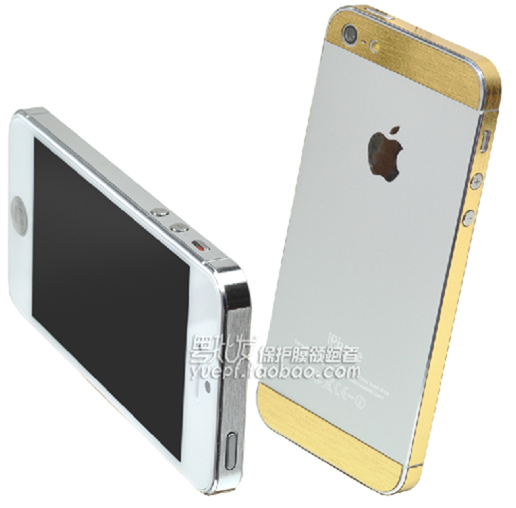 Apparently, Apple has been ramping up production of the Gold iPhone 5s to meet the incredible demand, so with any luck, most consumers should be in possession of the device they so crave within the next few weeks – at least in those markets treated to the early stretch of the launch. China, for the first time, had been a part of that, and judging by how many of these conversion kits are selling, it’s fair to say that iPhone mania is taking just as much of a stronghold there as it does in the U.S., UK, and other parts of the world.