We opened the door to 2012 just over a week ago, and already we have been treated to some tantalizing technology goodness in the form of rumors, announcements of future releases and also some official press releases about delicious new products. One such delicious product was announced two days ago by Tokyo based Nikon, who have officially introduced the world to their new Digital-SLR camera, the D4. 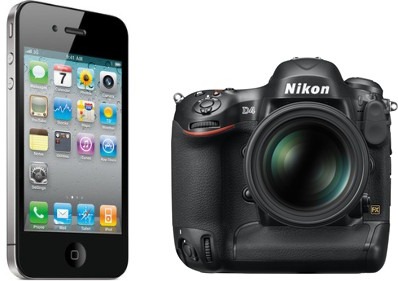 With the 2012 Consumer Electronics Show, to be held in Las Vegas, fast approaching us, some of the worlds greatest technology companies are using it as an opportunity to launch and showcase their new range of products. Nikon is one of these companies, with the new D4 being exhibited at the event as the new flagship model of their SLR range. For all the hardcore photography enthusiasts out there, I’m pretty sure the D4 is already on your radar, but just what features does the new model hold?

The D4 comes equipped with an all new Nikon FX-format CMOS image sensor and the latest image-processing engine which has been painstakingly optimized purely for Digital-SLR cameras. It also has an effective pixel count of 16.2 million pixels and can handles a broad range of lighting conditions with ease due to the high sensitivity range, from ISO 50 to ISO 204800. As if that wasn’t enough, the camera also writes images to memory cards a much quicker speed as it has built in native support for high-speed UDMA 7-compatible CompactFlash memory cards and next-generation, high-speed XQD memory cards.

When you add all those features together into one beautiful package, it isn’t hard to see why the Nikon D4 has been propelled to leader of the pack and looks set to be a hit at the 2012 CES. But in the words of the late Steve Jobs, there is "one more thing", which makes us salivate over this camera. Possibly an unexpected feature, and certainly one I didn’t see coming is the ability to control the camera wirelessly using an iPhone or iPad. I think we could definitely see an upward trend of companies recognizing the benefits of using devices such as the iPhone to allow users to control their hardware remotely.

Full details about this feature integration are yet to be released, but early signs indicate that the use of a Nikon App Store application may not be necessary with the user being able to take control of the camera using Mobile Safari on the device, very similar to the innovative control system used in the Real Racing 2 Mac app. The D4 device also has a wireless adaptor, dubbed the WT-5, so it is possible that remote control could be implemented using that attachment.

The wireless control allows the user to view what the camera is looking at, manage focus points with a simple tap and having the ability to control some of the main device functions like adjusting white balance and the ISO settings. More information about the remote features should be publicly available after the Consumer Electronics Show.