We have all sat patiently waiting for nearly twelve months and with the rumored announcement of the iPad 3 set for March 7th, the time is drawing ever closer where we will actually get to see the next generation iPad in all of its glory. Until that day, we will need to settle for rumor and speculation like we do numerous times a year for every product launch. So far, in this run up, the iPad 3 rumors have thrown out the possibility of a high resolution Retina display as well as a possible quad-core A6 processor and a thicker casing for the device.

All kinds of rumors have been flying around the world wide web for the last few months with the MIC Gadget website now throwing together a rumor round up containing a mix of the alleged features and aesthetics which will greet us in March. The article shows a number of photographs which are believed to be of the new iPad 3 shell which will be used for manufacturing the new device and when held in comparison to an iPad 2 rear shell shows notable visual differences. 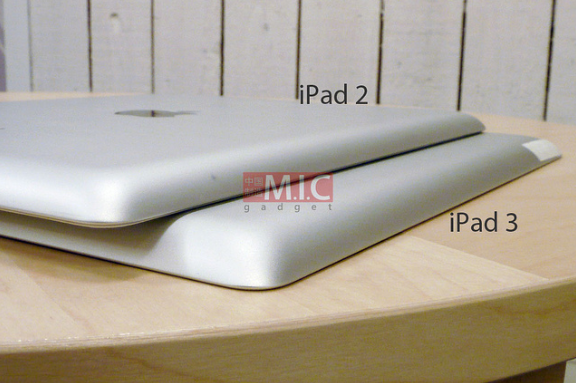 When the two shells are held together, the proposed iPad 3 template clearly looks thicker and whilst we have no firm measurements, 9to5Mac are estimating that it could be a 1mm-1.5mm difference in thickness. The new design is also more heavily tapered which could be a deliberate feature to give the new iPad 3 the feel of being thinner whilst actually maintaining a thicker profile. The shown images are only of the rear of the proposed device, but the report also claims that the iPad 3 will have a narrower bezel than its predecessor.

One other piece of speculation which we have seen before relates to the camera housing which is visible on the rear of the images. The housing for the lens of the new camera is noticeably larger than on previous iPad models which seems to confirm that the device will have a drastically improved camera, possibly an 8 megapixel offering as we have seen with the recent iPhone 4S. One of the biggest complaints about the iPad 2 and certainly a personal big bear of mine was the extremely poor quality of the rear camera on the tablet so any improvement would be a welcome addition. 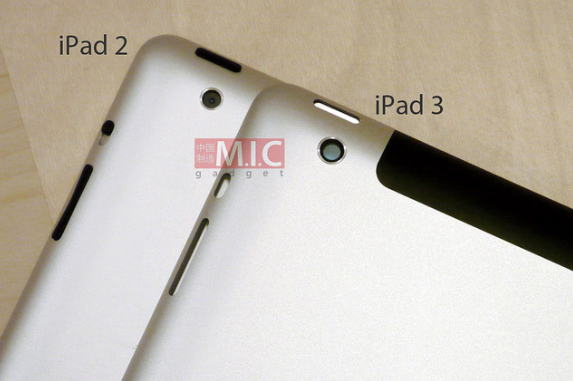 Finally, the claim that we could see a 7-inch version of the iPad still seems to be knocking around although this has been speculation which rears its head time and time again but never seems to amount to much. MIC’s sources also make some predictions about the internal storage of the new iPad 3, claiming that consumers will be able to purchase the device in either 16GB, 32GB or 128GB versions.

As the event and release date draw nearer, it stands to reason that additional information will become available, but until then speculation is all that we have to go on. I for one hope that the 8 megapixel camera comes to fruition as well as the pretty much confirmed Retina display but only time will tell.