Chart: Just How Much Of Your Smartphone’s Surface Is Taken Up By Its Screen?

With smartphone screens getting larger and larger, most manufacturers are beginning to focus on trying to make sure that the ever-increasing screen size isn’t going to automatically mean that our handsets are going to grow proportionately. Thinner bezels are the order of the day for all smartphone makers at the moment, which is why a new chart is particularly pertinent.

The chart itself is a simple one, eschewing the current trend of graphs upon graphs in favor of a few rows of smartphones with percentages. The real meat of the whole thing is those numbers though, with that percentage being the amount of a given handset’s face that is taken up by screen rather than bezel or buttons. All the usual players are there, with LG, Samsung, Apple, and HTC all in attendance.

The outcome is pretty damning if you’re Apple, with its iPhone handsets ranking low with at most 60% of its front panel being made up of its 4-inch screen. The rest is made up of that iconic Home button as well as the obligatory earpiece speaker and assorted sensors. That Home button now also includes the iPhone 5s’s Touch ID hardware as well of course, so there’s not a great deal Apple can do about this particular stat right now.

By contrast, LG’s G2 sits at the top of the pile with 76% of its face being taken up by screen. Android’s on-screen buttons helps the situation here and is probably part of the reason for Android devices performing better than Apple’s hardware in this particular chart. 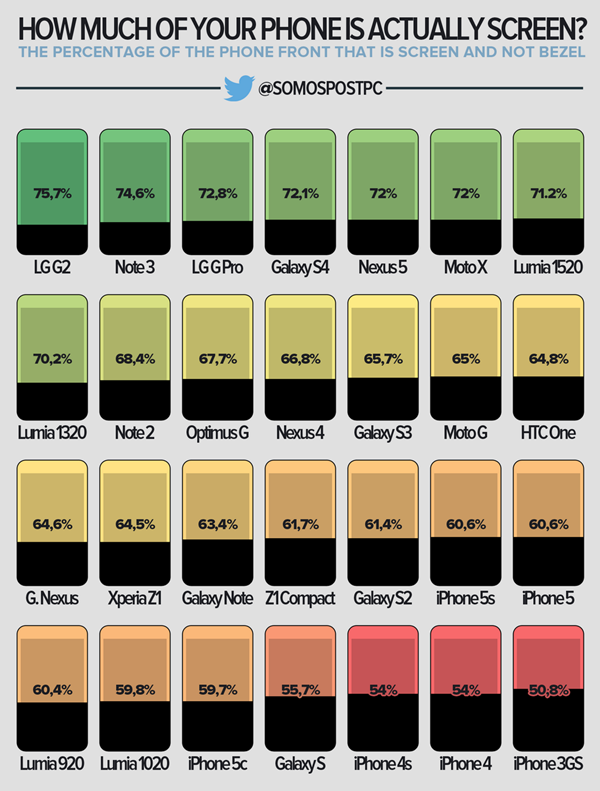 To that point, Apple has been rumored to be considering a way of putting the Touch ID sensor under an iPhone’s screen rather than under the Home button, which could potentially lead the way to button-less iPhones at some point in the future. The Home button is one of the most recognizable features of an iOS device though, and we’re not sure whether Apple is ready to give it up just yet.

Even if it does mean that its devices fall towards the bottom of charts like this one.