Apple has been long rumored of entering the home entertainment market with their own HDTV. Sources even claim to have seen the mystical HDTV, describing it as an Apple Cinema Display with a $99 Apple TV built-in.  All these strong rumors of Apple releasing a dedicated HDTV have have amounted to absolutely nothing.

I personally believe Apple has already entered the home entertainment market. The $99 Apple TV is the Apple HDTV; after all, what it does is inject the Apple TV OS into any HDTV. There are two big benefits to this: it’s easier for Apple to manufacture and very easy to sell to consumers because of its very reasonable price of $99.

Yet despite all that, Apple TV has yet to really go big. In its current state, the Apple TV is a bit limited: it doesn’t allow developers to make their own apps. You can, however, use an iOS device to do all the heavy-lifting and enjoy your app on the big screen. Dual-screen apps like Real Racing 2, Perfect Browser are good examples of this. 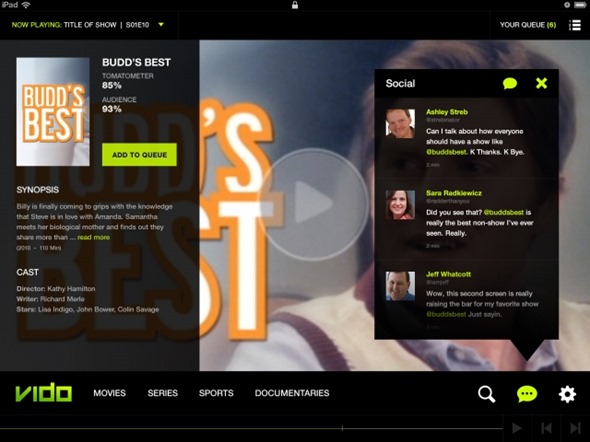 App Cloud has been in the market for over a year. It allows developers to easily create apps for iOS and Android with minimal coding and without having to learn platform-specific languages like Objective-C.

The new version of App Cloud comes with an important new feature called Dual Screen Solution for Apple TV. These are a bunch of APIs that enable developers to create dual-screen apps for Apple TV that enhance your home entertainment experience.

Jeremy Allaire, CEO Brightcove, demoed a fictional app called Vido which lets users use their iPad for navigating and searching while whatever video is playing is up on the Apple TV.

While we haven’t tried any app built using App Cloud ourselves, dual-screen apps do look much better than the traditional method of using iPad/iPhone as a second screen and a limited remote control.

You can learn more about App Cloud on its official website by heading over to: www.brightcove.com/en/content-app-platform