Android smartphones have, till recently, been notorious for their terrible power management and resulting awful battery life. This problem became apparent with earlier high end smartphones like the Nexus One and HTC Desire HD, became worse with 4G LTE devices like the HTC Thunderbolt on Verizon, improved a little with the Galaxy Nexus and has now, finally, reached a state where one can use a Galaxy S III and One X without carrying an extra charger to work. This is mostly thanks to newer hardware that sips less power.

Still, there is always room for improvement. We’ve come across an app today that aims to increase battery life by reducing use of cellular data – one of the biggest sources of battery drain. 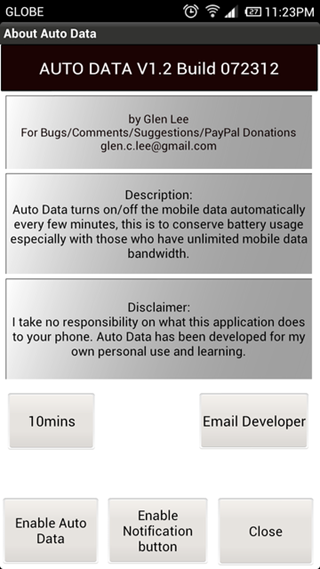 We stumbled upon the app over on XDA Developers’ Android Apps and Games forum where developer providence discusses his app’s basic feature set and how you can help improve it.

Auto Data is a one-trick pony. It’s sole feature is that it toggles your mobile / cellular data when your Android device’s display is turned off. It flips the switch every five minutes so that your Internet reliant apps – Twitter, Google+, Gmail, Google Reader etc. – can update in the background.

According to the developer, this app has only seen limited testing on an HTC One X. It may or may not work on other smartphones.

Personally speaking, I remember getting slightly better battery life with Juice Defender on an HTC Desire a few months ago. Since Juice Defender and Auto Data are based on the same principle, I think it is safe to assume that Auto Data will work well.

For the download link, please visit the official thread over on XDA Developers. Don’t forget to help the developer improve the app by voicing your opinion (complaints, suggestions) about the app’s performance.

The app is available in the form of an APK that you can manually install after enabling Unknown sources from Settings > Security.

Also, be sure to let us know what you think of Auto Data by leaving a comment over on our Facebook and Google+ page.