Weekend is here, and iOS fans would know what that means; yes, another app going free on the App Store as part of Apple’s free app of the week initiative. This week’s title is an arcade racer which usually retails for $2.99 on the App Store but can be downloaded absolutely free till next Thursday.

Called Impossible Road, it is a minimalistic racer developed by the folks at ‘WONDERFUL LASERS’. The game is intended to be extremely fast paced, which allows the minimal theme including gameplay and the design elements blend in very nicely with what the game has set out to achieve. 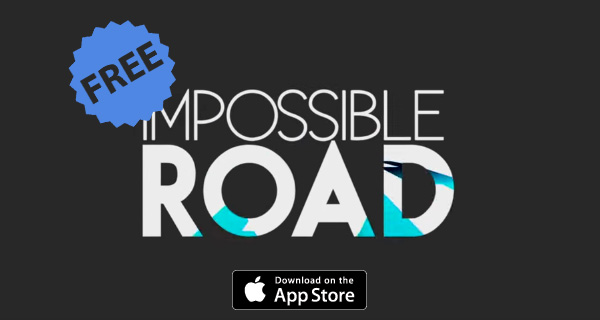 Those of you into iOS games would have already come across similar titles in the past, but not every game is as addictive as this one which makes you come back for more and more.

Given the pace at which the game plays out, you can bet that getting to grips with the tracks will not be the easiest of tasks. All of this despite the game controls being touted as simple as touching the right side of the screen to turn right, and tapping the left side of the screen to turn left. The good news is that it also supports MFi-compatible gaming controllers if that helps you in any way, considering that you have to “Guide THE VESSEL down the roller coaster-like track at speed, scoring for each gate you make it through. Navigate hair-pin bends, jumps, banked curves and adverse camber in the quest for the perfect line.”

Getting into the action, you will instantly realize how aptly the game has been named. However, it’s the ability to get back onto the track quickly for a retry and the pumped up music scores that makes you keep coming back again and again till you “learn how to cheat the game, and you discover that it is rewarded not punished, the leaderboards will belong to you.”

There are a total of 4 themes available, and if you happen to be playing the game on an iPhone 6s/6s Plus, or the iPhone 7/7 Plus, you’d be excited to know that it also supports 3D Touch controls.

Here’s the official launch trailer of the game:

As mentioned earlier, you can download Impossible Road for free till Thursday from the iOS App Store.