A new Apple patent will put an end to recording events, at least on iOS devices, a move that will definitely make copyright holders happy. This technology will essentially stop the device’s built-in camera from operating by censoring any pictures or video taken, partially or entirely.

As specified by the patent, this technology will enable cameras to detect a certain spectrum of infrared radiation and refuse to work if such radiation is detected: 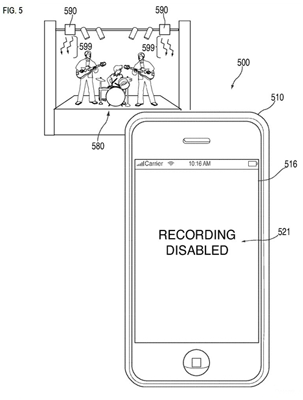 That’s a fancy way of saying "if you’re not supposed to take a picture, or a portion of it, the camera won’t save it". More than blocking the ability to take pictures, however, this patent also hits at the possibility that this can be used to add watermarks to pictures, something that could be inserted by event hosts to promote a certain place or product.

Of course, this would be fairly hard to implement, since event holders would have to find a way to emit the necessary spectrum of radiation, something that could cost more than just letting people record the event itself and sharing it on their websites. It’s also unclear how Apple plans to let event holders emit that signal, although it could engineer a proprietary device for this purpose alone.

Many copyright holders have been looking for a way to block this type of recording for years. A technology like this could become commonplace in movie theaters, where people often sneak in and manage to record the newest blockbuster. While that might be the case, it’s also important to point out that Apple files many patents over a short period of time and many never come to fruition as real products. Instead, the Cupertino company simple uses it to make sure it gets credit for an idea, in the slight chance that it ever makes it into a product.

This also won’t work unless it becomes universal across all devices. If Android phones don’t have their pictures and videos censored, it shouldn’t be hard to guess where pirates will be headed.

(For more details, check out the official patent filing)