If you pay attention to the official murmurings within Apple, then they will still swear that the Apple TV unit is merely a hobby to the company that doesn’t detract focus from more important products like the iPhone and iPad. However, unofficially speaking, it seems that Apple are paying a lot more attention to the little black puck set-top box, something that will become more evident when the next software update goes public, thanks to the addition of the Bluetooth support that we have been expecting to see for quite some time.

It was approximately twelve months ago when the code was first discovered in the Apple TV iOS code-base, that suggested Apple was planning on adding support to allow users to connect Bluetooth devices to the Apple TV in the future, and it now seems that we are about to welcome that day into reality. The latest beta release of iOS for the Apple TV brings with it a dedicated Bluetooth menu that hasn’t been present in previous releases, but it also allows users to connect Bluetooth enabled wireless keyboards directly to the unit which negates the need for using the infrared controller.

Considering a lot of Apple TV owners also own a Mac and will have one of Apple’s official Bluetooth wireless keyboards, it should come as a very welcome surprise to see official connectivity support coming up in the next release of iOS for the device. Rather than having to fiddle with the small silver remote that comes with the product, users will be able to use the navigation keys on the keyboard to whizz through the menu, but more importantly; will be able to type directly on the keyboard for text entry rather than having to rely on the software based keyboard or using the Apple Remote app from an iOS device. 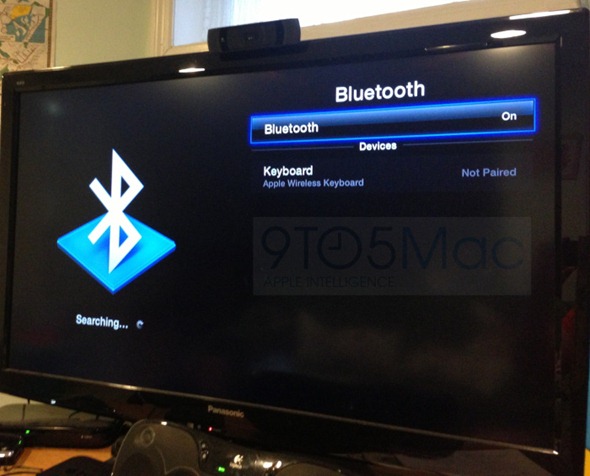 Early testing of the iOS beta for Apple TV has shown that Apple has only added the ability to pair Bluetooth keyboards with the unit, and as yet it doesn’t accept connection requests from Bluetooth speakers or headphones. It’s unknown whether or not the company plan to open the Bluetooth protocol up to additional devices or purely intend to only allow their wireless keyboards to be connected to the little black box. Either way, it’s definitely a step in the right direction and welcome news for the legion of Apple TV owners out there.