In the age of the internet that is packed full of inquisitive minds, it is extremely difficult for companies to keep things a secret or hide their intentions away from eager prying eyes and ears. Over the last week or so, we have been hearing murmurings that Apple were planning on opening up an official online eBay outlet store to gain some additional exposure for their officially refurbished products, and it looks like that additional sales channel is now in full swing, although there remains some question over whether it is actually operated and controlled officially by Apple or whether or not it is just an Apple sanctioned and approved reseller offering the refurbished goods.

The store is maintained by the “refurbished_outlet” account, and although it contains no further details or corporate branding, the account has managed to amass 99.7% satisfaction rate on eBay through 727 different transactions. Sales of the refurbished Apple products on the account go back to the 19th of last month when a refurbished third-generation white iPad flew off the virtual shelves, and it seems the account has been pretty active since that date with a number of iPods, iPads and Macs all selling fairly often.

The eBay store actually contains a fairly prominent notice saying: “This seller has been authorized by Apple Inc. to sell Apple Certified Refurbished products on eBay.” which would seem to immediately suggest that the store is operated by an official reseller with the express permission of Apple Inc. However, various outlets are reporting that unnamed sources within eBay have gone as far as to say that the outlet is actually being handled by Apple as an initial low-key trial, and if sales prove to be successful then it could open the door to bigger collaborations between Apple and the auction company. 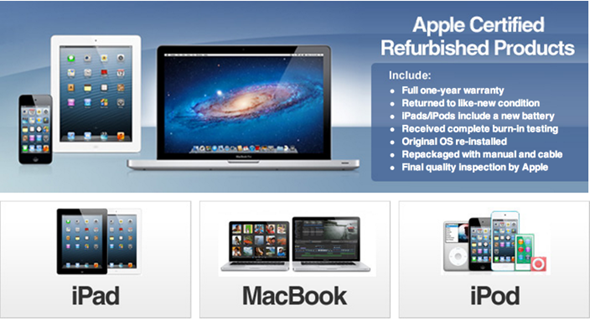 At this moment in time, it doesn’t seem to make that much of a difference to the consumer if the eBay store is official or a reseller account. All products are priced with the same Buy it Now price that is offered through the official Apple refurbished channels, and all products come with the same full one-year warranty, burn-in testing and the original OS re-installed on compatible machines. The listings also suggests that all products have undergone full refurbishment and quality inspection by Apple, so the products are obviously supplied from the Cupertino company. We can expect more to unfold with this one in the next few weeks.