It’s been a while since it has publicly been talked about, so you may have actually forgotten about it or let it slip your mind, but Apple has now finished recording its Planet of the Apps TV series.

According to a source who wishes to remain anonymous due to their involvement with the show, Apple’s mini-series is an unscripted creation which looks to focus on apps for its many platforms, such as iOS and macOS, as well as the talented and diverse developers who create and publish those apps.

The anonymous source has not only provided a small amount of information about the mini-series and its content, but also about the location, suggesting that Apple had put together a purpose-built set near Hollywood in Los Angeles, California.

Finished shooting Planet of the Apps series has resulted into the set being tore down, which would appear to be a shame given the technical nature of it, according to the unnamed source:

Apple built the set and tore it down at the conclusion of filming. The set was absolutely beautiful and set up in a way like no other competition show I’ve seen before. It’s very tech chic, with beautiful decor and decorations. Only Apple could do it this way. It’s very, very well done. Steve Jobs would have been proud of the set.

A glowing recommendation indeed when it is being suggested that the late and iconic Apple co-founder Steve Jobs would have been proud. As well as giving reference to the set, the source has also stipulated that the Planet of the Apps series will have certain similarities to existing reality TV shows, such as Shark Tank and The Voice, with the latter being quite the coincidence as William Adams, better known as Black Eyed Peas rapper will.i.am, also happens to be the producer for the Apple series and the judge on the extremely popular talent show in the United Kingdom. 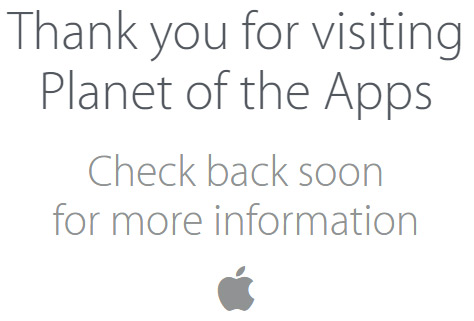 “Check back soon”, says the Planet of the Apps webpage.

Apple is looking to make Planet of the Apps an “inspirational” show which will hopefully inspire the next-generation of app developers to create beautiful and innovative software for its many platforms. Filming may be finished, but we just need to sit back and wait for Apple to actually release it to the world for us all to see.