Apple’s latest filing with the Securities and Exchange Commission (SEC) provides us with a glimpse of information, showing that CEO Tim Cook took home $1 million more in 2015 than 2014, but that his top executives were better compensated during the same period.

It’s always extremely interesting when Apple announces its quarterly results. It represents an excellent insight into just how the company is performing and which devices and services are bringing in the most revenue for the company on a quarterly basis. However, such is human nature that it’s even more interesting to see exactly what company executives take home in salary and bonuses.

It was reported that Apple CEO Tim Cook managed to earn himself an impressive $9.2 million during 2014. That princely amount was provided to him in the form of salary and future stock incentives. The filing with the SEC shows that Cook seems to have done enough in the following twelve months to warrant a salary increase of $1 million per annum, taking his annual Apple earnings from Apple for 2015 to $10.2 million. In addition to that annual compensation for his work, Cook also owns close to $60 million in Apple stock and $479 million of restricted stock units that will vest in installments between now and August 2021 should he still be head honcho at the company. Cook’s salary also increased from $1.7 million to $2 million per annum. 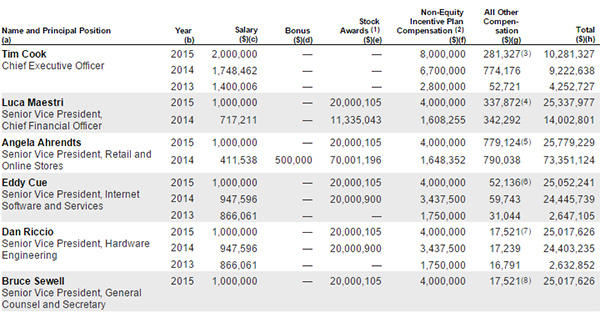 The Securities and Exchange Commission filing also showed that if the opportunity arises to be an executive within Apple then you should grab it with both hands. CEO Cook may have banked over $10 million during 2015 but it seems that his top executives have taken home the majority of the financial windfalls banking around $25 million each. Chief Financial Officer Luca Maestri bagged himself $25.3 million, which was a huge increase from the $14 million he took home in 2014. Head of Retail Angela Ahrendts, who was pried away from Burberry with a $73.4 million incentive package, had her salary bumped up to $1 million per annum, and with that, she is now the highest paid executive at Apple. Well-known Eddy Cue also managed to find himself on the financial gravy train with earnings of $25.1 million during 2015.

Apple once again declined to publish exactly how much Chief Design Officer Jony Ive was paid during the period. We can probably deduce from that that Ive isn’t going to be going through any financial difficulties anytime soon. We’ve seen the salaries for 2015, now we just need to wait until January 26th for Apple’s Q1 2016 earnings to see how the company is performing.