It’s sometimes difficult to remember a time before the App Store, but Apple has today a new press release in which it reminds us that as of a few days’ time, the App Store will officially be 10 years old.

Originally launched on July 10th 2008 with just 500 apps available, the App Store changed the way we use our iPhones forever and created a huge number of new developers in the process.

Now, anyone with a Mac and the required knowledge was able to create an app that would run on any iPhone around the world, and that meant that over the next ten years, the App Store would grow into a worldwide phenomenon.

Phil Schiller, senior vice president, Worldwide Marketing, Apple: “In its first decade, the App Store has surpassed all of our wildest expectations — from the innovative apps that developers have dreamed up, to the way customers have made apps part of their daily lives — and this is just the beginning. We could not be more proud of what developers have created and what the next 10 years have in store.”

Before the App Store’s arrival, Applinge and CEO Steve Jobs were trying to push iPhone owners towards web-apps, something that piggybacked off the device’s impressive Safari web browser but ultimately was never going to be able to compete with “real” native apps. This was further highlighted by the growing jailbreaking movement, which allowed developers to make native apps that could be installed on devices.

Thankfully, Apple saw the error of its ways quickly and created the App Store. Marco Arment, developer of Instapaper at the time, was in the App Store on day one and says that “the App Store has been by far the easiest way for developers to reach the most people” with apps and services. It’s this ease that has led to the App Store’s millions of apps. 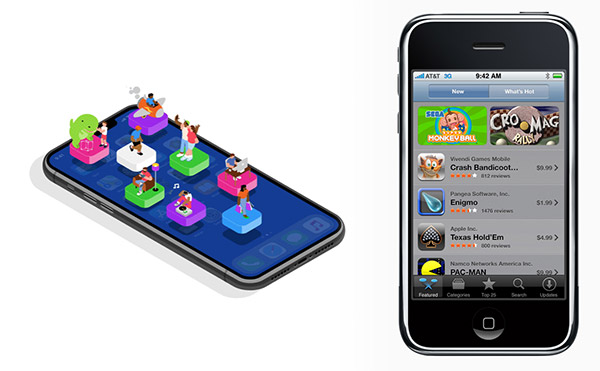 Would the iPhone have been a success without the App Store? Possibly, but we very much doubt it would have been the runaway success we have seen over the last ten years.