Apple’s Android App Will Help You ‘Move To iOS’

Apple showed off many things during its WWDC opening keynote today, but one thing that did not get any stage time was Move to iOS. But there it is, bold as brass sat on the iOS 9 product page on apple.com.

So what exactly is Move to iOS? Well, it does exactly what it says on the tin.

Set to launch on the Google Play Store when iOS 9 goes live later this year, Move to iOS will make it easier for owners of Android devices to ditch their existing hardware in favor of something new from Apple. According to Apple’s own website, Move to iOS will allow users to wirelessly and seamlessly move a user’s contacts, instant message history, photos, videos, Web browser bookmarks, email accounts, calendars, wallpapers and any DRM-less media from an Android smartphone or tablet to an iPhone or iPad. Apple’s aim is to make it as easy as possible for people to make the jump from Android to iOS – something it says is happening plenty already.

The release of iOS 9 this fall coincides nicely with the timescale that Apple usually follows when launching new iPhones. With that in mind, it’s possible that Move to iOS will land on Android’s Play Store just in time for Apple’s latest iPhones to arrive in Apple Stores and just weeks before new iPads do the same. If any Android owners are tempted to jump ship in favor of iOS, then that is the time they are going to waver. And Apple knows that. 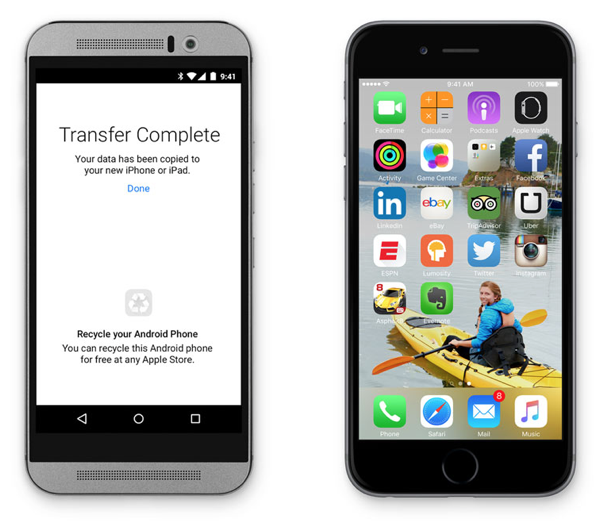 It’s interesting that Apple chose not to mention Move to iOS during its WWDC opening keynote, as CEO Tim Cook is never one for missing an opportunity to poke fun at Android. That said, Apple’s keynote already moved at quite a pace due to the volume of announcements and with Cook forgoing the usual sales figures at the start of the keynote it’s possible Apple simply didn’t have time.

Even if it did miss a chance to poke the big brown bear that is Google.