Apple Admits To Need For Larger iPhone, According To Leaked Internal Documents

The ongoing Apple vs. Samsung patent trial has managed to capture and hold our attentions for a number of reasons. The bitter legal wrangle currently shows no signs of subsiding as both companies continue to flex their legal might in the hope of claiming even the smallest of victories over the other.

For those of us looking in from the outside, the case has not only confirmed to us that companies are more than willing to aggressively pursue what they believe to be patent infringement, but has also made some extremely interesting documents public. The latest reveals to be unearthed come from within Apple and show that Tim Cook and his team not only have a clear understanding of how the smartphone market is developing, but also what is required to get the company’s growth back on track. 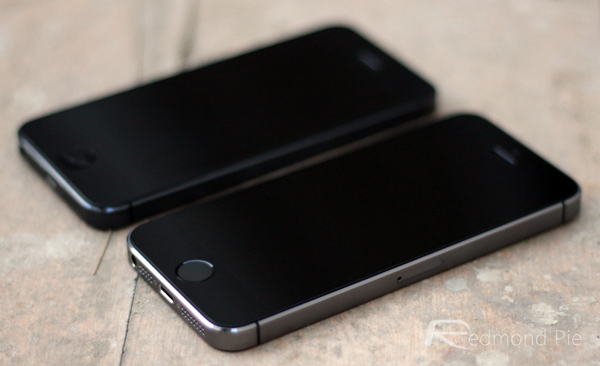 Part of the revealed document set includes a set of slides created by Apple 12 months ago in April 2013. The multiple slides within the presentation formed part of an initial research study into the development of the smartphone market, with the intention being for any findings to be put into development during the current calendar year. It’s interesting to see that Apple’s market growth within the smartphone sector has been slowing quarter after quarter, and even more interesting to see that the Cupertino company has identified a number of key reasons why that is the case. 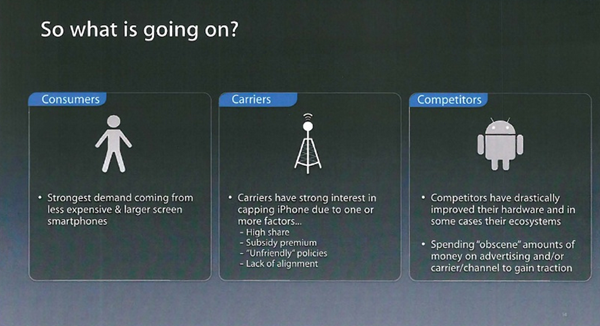 Apple believe that part of the problem stems from the fact that consumers are starting to demand larger screen smartphone devices that fall into a cheaper price category. It’s also been noted that competing companies like Samsung and HTC has invested a lot of time and effort into “drastically” improving their hardware and ecosystems to be in a better position to compete with the iPhone and iOS. The same companies who have also shown an increased willingness to spend “obscene” amounts of money on advertising to get new products in front of a worldwide audience. 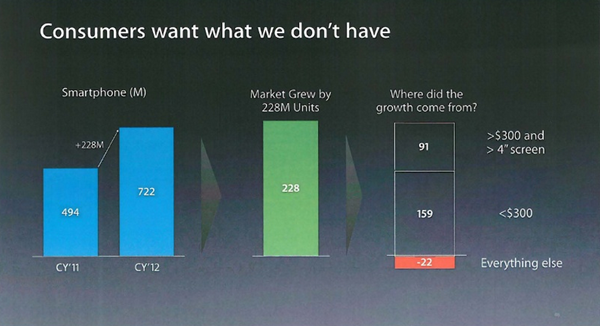 Tim Cook’s team has also identified that the majority of the market growth has come from devices with larger than 4-inch displays that fall into the sub-$300 bracket.

We are yet to receive any official confirmation that 2014 is the year that Apple will target these issues, but rumors surrounding a larger iPhone 6 simply won’t disappear. The company’s own research has confirmed what it is that consumers want, it’s now down to Apple to reach out and provide that hardware.