Another Galaxy Note 7 Explodes, Causes $1380 In Damages To Hotel Room

Samsung is having a pretty bad time of it right now. Having announced that a recall of all Galaxy Note 7 smartphones was required after some were reported as catching fire whilst on charge, Samsung may have been forgiven for thinking that it had gotten out ahead of the problem no matter how embarrassing it may be. And it was probably right, but the problem it now faces is that these phones are still exploding, with the latest being the first reported case of a Galaxy Note 7 combusting in Australia.

As if the smartphone catching fire wasn’t a bad enough headline, though, this one managed to cause over $1300 worth of damage to a hotel room in the process. A bad day at the office for Samsung’s P.R. rep incoming.

The phone in question belongs to Tham Hua, who took to Reddit to complain of his Galaxy Note 7 catching fire whilst he lay, asleep, in his hotel room. Upon being woken by what he describes as a small explosion, he understandably knocked the device off the table and onto the floor. Unfortunately, being on fire, the phone caused a spot of damage to its surroundings – damage to the tune of $1380.

As for the phone itself, it’s in a bad way. Photos of the device show it pretty well charred on both the front and back sides and Hua says the thing is in such a state that he can’t even open the SIM tray in order to retrieve the SIM or the microSD card he was using with the phone.

If the photos don’t do it justice, that right there should tell you the state this Galaxy Note 7 ended up in. The good news in this story is that Samsung has given Hua a loaner phone – we don’t know what phone, before anyone asks – and will pay for the damage to the hotel room, which is great.

After his unfortunate experience, what did Hua have to say on the matter of Samsung’s return program? “Please do not use the phone anymore, it is dangerous and not worth the risk.” 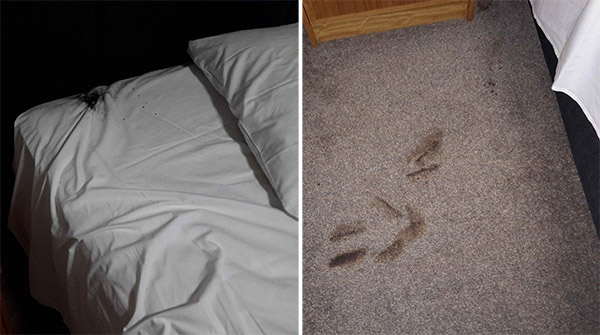