Angry Birds Will Soon Be Flying Onto An Xbox 360, PS3 And 3DS Near You!

Angry Birds has been, by quite a distance, the most popular and successful title to stem from mobile-inspired casual gaming industry. As well as being among the most popular titles on mobile devices, it has also reached a number of browsers, as well as PC, Mac, and Facebook in its quest for world domination. Now, those yapping, bullish poultry specimens are hitting the big time, with version of the Xbox 360, PlayStation 3, and Nintendo’s 3DS in the reckoning, according to creators Rovio.

There have been rumors Angry Birds will be moving onwards and upwards for a while now, with Rovio also dropping hints of some future console implementation, and now the company has confirmed upgraded versions of the first three in the Angry Birds series are currently being worked on. No details have been revealed regarding when they’ll be released, but for those in favor of frighteningly-addictive, easy to pick-up-and-play titles, this is certainly something to look forward to.

Petri Järvilehto, Rovio’s Executive Vice President of Games, spoke of how each title is being meticulously enhanced for use with HDTVs and consoles. Although the game already looks rather nice on a mobile device, plenty of work has to be done in order to remaster the aesthetics for the living room gamer, and if what Järvilehto says is anything to go on, the experience in general could be a great deal better than currently available:

There are new cinematics, extras and other entertaining content. In addition all of the existing material has been uprezzed and re-treated for the high-resolution and big screen.

The trilogy consists of Angry Birds, Angry Birds Rio, and the all-in-one package will feature animated backgrounds as well as multiple lighting modes. With the success of the plush toys and other AB merchandise, don’t be surprised to see Rovio capitalize on the huge marketing prowess of the series by offering various peripherals decorated with those grudge-bearing balls of fluff. 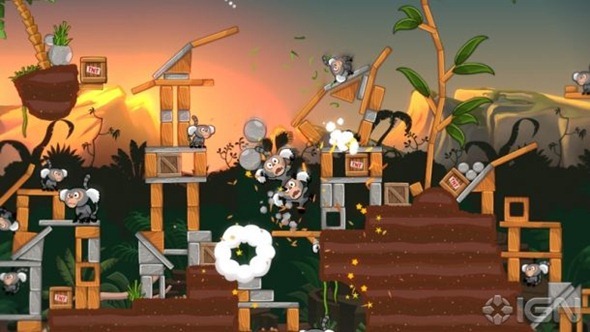 At this point in time, there’s no mention of Angry Birds Space, but the games will support Xbox Kinect, PlayStation Move, as well as StreetPass. In terms of release date, nothing has been set in stone, but it should all be prepared by the holiday season.