Google today made it possible for owners of Android Wear smartwatches to use their wearables with an iPhone, though the bad news is that the tech giant officially says that only new devices will work. That means that owners of the LG Watch Urbane, and the upcoming Huawei Watch, Asus ZenWatch 2, Moto 360 2 and others are good to go, but things aren’t quite as cut and dried as that. See, it turns out that owners of older Android Wear watches can also pair their devices with an iPhone.

Reportedly, the LG G Watch and G Watch R can indeed be used with an iPhone and we ourselves can confirm that the Moto 360 works with the new Android Wear iOS app as well, even though it isn’t technically supported according to Google. From our testing, it would appear that any smartwatch running the latest Android Wear 1.3 update should be able to pair just fine with an iPhone, with notifications being pushed from the phone to the watch just as you would expect them to. Users can even choose which watch face they want to use, though the selection right now isn’t all that great. Basically, all the functionality that Android Wear on iOS is capable of works with older watches just as good as it does with newer ones despite what Google is saying. 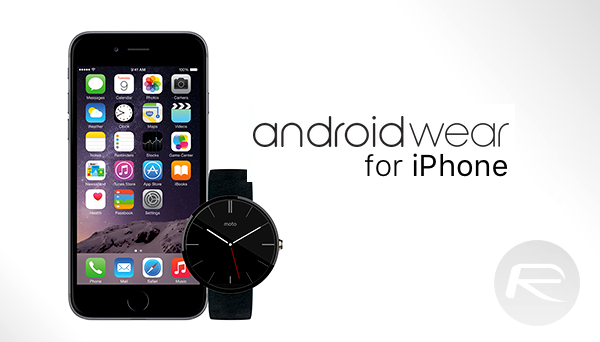 The reason for Google’s conservative list of supported devices isn’t yet clear, though the common belief is that it would rather set expectations that devices that carry Android Wear 1.3 out of the box will work. The Moto 360 and other older Android Wear-powered smartwatches will need to be updated to the latest version of the software after being paired with an Android device, which is no good to anyone who doesn’t own one. If that’s the case, then it does at least make a modicum of sense, even if it does muddy the waters somewhat for those who already own a device.

While Android Wear now works with iPhones, we wouldn’t expect Apple to reciprocate by allowing the Apple Watch to work with Android just yet. Google’s allowance of Android Wear and iPhone cross-pollination makes more sense given the company’s existing push to have its software available on iOS, but Apple making the Apple Watch work with Android phones?