Android Malware Has Quadrupled Over The Past Year, Says Security Firm

Given its position as the most widely-used mobile software within the smartphone market, it’s only natural that Android yields a significant amount of blog space, but while the tech community offers much praise for Google’s OS, Android also generates its fair share of negative press – notably with regards to outbreaks of malware.

It has been an almost weekly occurrence for large portions of this year and last, and those behind the Trojans, phishing and scams have become increasingly cunning and clever in their methods and execution. What’s most concerning is that many of the fake app-based malwares in circulation have purported to be legitimate copies of some of the most popular titles around. No sooner were Android users on red alert for a dodgy Angry Birds Space app, were they informed of a phony Instagram app wreaking havoc through some of the unverified mediums.

Now, as Finland-based security outfit F-Secure reports, Android malware has quadrupled between 2011 and this year. Releasing the stats from its Mobile Threat Report Q1 2012, the company attributed the high numbers to Android’s meteoric rise to prominence over the last couple of years. “Unfortunately,” notes the report, “such popularity (amongst other factors) makes Android a lucrative target for malware authors.” 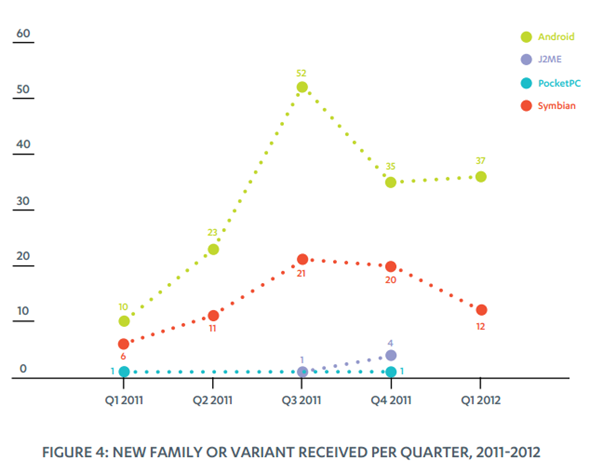 With 56.1% of all smartphones worldwide running Android, it’s not difficult to see why it is such a huge target, and F-Secure went on to note that the rise in malware numbers is unlikely to hit a plateau any time soon. Having recorded 10 new malware families and variants during the first quarter of last year, that number leapt to 37 for the same quarter this year.

More flabbergasting, however, is the comparison between the count of malicious .apks, such as the aforementioned problematic Angry Birds Space and Instagram releases. Q1 2011 to Q1 2012 saw the numbers leap from a manageable 139, to an astronomical total of 3063. Given my average grasp on math, that equates to a rise in excess of 2000% rise, and whichever way you look at it, it’s scary.

As with most security updates, F-Secure dished out a stellar bit of advice to those concerned about their device’s security being breached: stick to the Google Play Store, and avoid downloading from third-party markets.