Android Gingerbread More Prone To Malware Than Any Other Mobile OS, Says Report

Google’s Android is by far the most widely-used mobile platform on the planet. Not only is it open-source, but recent improvements have seen its performance levels exceed all expectation, yet while Android’s presence in the smartphone and tablet continues to rise, so does its reputation as being susceptible to malicious attacks. A recent report by Kaspersky Labs has just revealed that while Gingerbread 2.3 is now fairly dated, it remains the foremost target to malware, with 28% of all blocked malware attempts in the third quarter of 2012 originating from version 2.3.6.

Android’s fragmented nature means it works a little differently to the likes of iOS and Windows Phone, and with 50 percent of Android users still running Gingerbread despite its age, it’s perhaps not too surprising to see that it’s a pretty big target. Ice Cream Sandwich, meanwhile, accounted for 22% of the blocked attempts, and as we get somewhat carried away by the buttery smoothness of Android Jelly Bean, it’s important to consider that the majority are still running on the much less polished, one and two-year-old firmware.

Of the attacks reported by Kaspersky, a vast quantity were Java exploits, and more than half of all malicious attacks looked to send premium SMS messages in order to steal vast amounts of money from the owner of the infiltrated device. It’s an attack we’re seeing more and more frequently, and often, the malware can have sent hundreds of messages – perhaps even more – in a very short length of time.

It’s not all bad news for Android, though. Kaspersky also added that the total number of mobile malware attacks dropped quite significantly in the third quarter of this year. Q2 saw an almighty 15,000 attacks in Q2, but that number had dropped to 9,100 by the end of Q3. Prior to that decrease, Kaspersky had recorded three consecutive quarters with increases in malware each time, so while Android and Gingerbread remain big targets, things, as a whole, appear to be looking up. 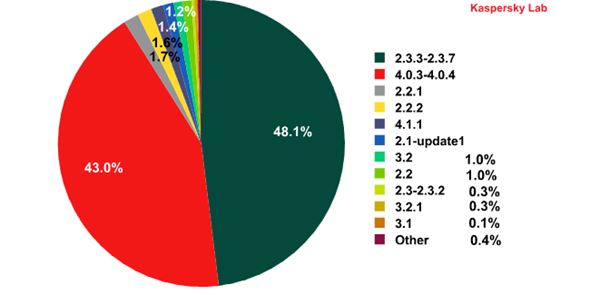 This report only takes into consideration blocked malware attacks, though, and with the Play Store still littered with dodgy apps, a lot more needs to be done if Android users are to feel secure and protected.